If you want the God’s honest I wasn’t the least surprised to see Milan Lucic arrive in Edmonton as an Oiler. He is a unique player, Peter Chiarelli’s first media avail mentioned “hard” and “heavy” more often than an AC/DC lyric. However, my second choice, after Lucic, would not have been David Pastrnak.

With what I am hearing I would not be surprised if David Pasternak @NHLBruins is traded. #contractproblems @NHLNetwork

The Boston Bruins would be flat out nuts to trade David Pastrnak and frankly I very much doubt it happens. If he is available, it behooves Peter Chiarelli to pursue a trade with extreme prejudice. Pastrnak as first-person shooter on McDavid’s line would be epic. The Bruins player I thought Chiarelli would acquire? David Krejci. However, the big ticket contract and flagging production probably disqualifies a deal (not to mention the NMC). Dealing for Krejci now would probably take Nuge, and set up something close to a Rick Middleton-for-Ken Hodge future (possibly). 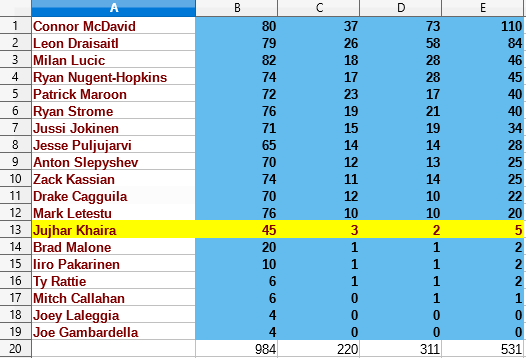 I see people talking about the Ryan Strome 70-point projection and wonder why there’s such an uproar. Above you see my RE projections for forwards, which is far different than The Forecaster (I think it’s the Forecaster) and what they’re trying to do.

My projections are based on Connor McDavid playing 70 percent of his season with Leon Draisaitl, about 60 with Patrick Maroon (no time on No. 1 PP for Maroon), and then the rest with Strome, Lucic and Nuge. Maybe a little for Jokinen. It’s a giant hedge from scorers No. 3 through No. 7.

The Forecaster can’t do that, they have to make a decision and it’s important they get it right. They could be wrong, but credit them for having the courage of their convictions. I don’t envy them and sure as hell won’t mock them. Tough thing to do, mind reading. Me, I’d try to figure out what the coach trusts and then go with that projection.

From 2014-17, that’s a fantastic cluster of young talent. The addition of Matt Benning gets forgotten but it was a big deal. Notice the massive number of names turned over from the 2012-14 lists as Peter Chiarelli basically sent away everyone but Oscar and Leon. That’s typical of a new manager. Seriously. I don’t have Kailer Yamamoto included in my RE, but there’s a good chance he plays some NHL games this fall.