(YOU WILL) SET THE WORLD ON FIRE!

Connor McDavid highlight videos serve as high octane reminders of the adrenaline rush Oilers fans will experience this winter. The speed is other worldly, the skill breathtaking, but it’s the combination of the two that sears itself into the memory banks. Shock and awe on demand? Connor McDavid set the hockey world on fire last year, what can he do for an encore?

Music! Huzzah! The man is the ultimate! What crazy luck brought us here? The dice had no memory, the computer was drunk and the dish ran away with the spoon. Jesus, Mary and Joseph we’re just weeks away from the greatest show on earth! 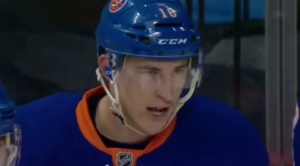 Ryan Strome’s arrival in Edmonton, in my opinion, is a reflection of Peter Chiarelli’s desire to ice a gritty set of skill forwards who can play center or wing. It no doubt helped the acquisition came in the weeks leading up to the Connor McDavid contract, but no one should suggest it has anything in common with the scenario where the New York Islanders acquired Jean Potvin back in March of 1973. The Islanders, concerned that No. 1 overall prospect Denis Potvin might sign with a WHA team after the club drafted, acquired Jean Potvin from Philadelphia for Terry Crisp in an effort to make things more attractive to franchise defender Denis Potvin.

This isn’t that, but I wonder if we eventually see Peter Chiarelli acquire some of 97’s junior linemates in the future. The longer we go into McDavid’s career without finding his first-person shooter, the more likely we see Peter Chiarelli reach out for possible connections. Who did McDavid play well with in Erie?

It’s a fine group, with only Betz likely to fall short of the NHL. Burakovsky is an NHL regular with the Washington Capitals, DeBrincat lit up the OHL and has a fine future ahead of him and Elie, despite posting pedestrian AHL numbers, looked solid as a rock in an NHL audition during 2016-17. Interesting set of options.

One of the quality picks by the Oilers at the 2017 draft, Ostap Safin was known to us before draft day and will be a player to follow this winter. Edmonton needs top flight forward prospects and Safin has real potential.

Safin’s name came up this week as part of the Saint John Sea Dogs training camp roster. It’s easier to monitor progress from the CHL, hopefully Safin has an impact this coming season and takes a giant leap forward. I have him as the No. 6 prospect in the entire system at this time. 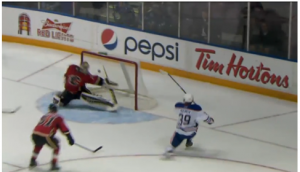 One of the more surprising items this summer (for me) came when the Edmonton Oilers qualified Bogdan Yakimov in order to retain his rights. He seemed a distant bell, and as he bolted the Bakersfield Condors to head back to Russia. That often means complete amputation but Edmonton chose to keep the door open. Yakimov has a tantalizing skill set (big center with some skill) and I’d love to see him back in North America. He has played one KHL game for Neftekhimik this year (1gp, 2pims, 2 shots, 14-9 in the FO circle, 23 shifts and 15:13 TOI) and plays again today.

It’s extremely rare to see an NHL organization fail to recognize truly ridiculous talent but we may have such a thing in Motown this summer. Andreas Athanasiou, he of the long name and brilliant highlights, remains unsigned and mostly unloved by the curious decision makers in Detroit. He scored 1.28 goals-per-60 at 5×5 and a humble offer sheet could get the job done because the Red Wings chose the ‘Drunken Sailor’ option when putting together the team’s cap number for the coming season. Edmonton’s future at LW is decidedly undecided, a young rocket winger like Athanasiou would be a tremendous addition. Offer sheet wildly unlikely,  but a trade would seem possible. Perhaps that’s how PC will use his cap room.

A special show today on TSN1260, beginning at 10 this morning. Bruce McCurdy will join me at 10:20 to talk Oilers and his trip to Mud Luke, Idaho for the total eclipse of Bonnie Tyler. At 11, we’ll both be joined by Rob Vollman, whose new book The Hockey Abstract 2017 is a brilliant read no matter your level of interest in hockey or analytics. We’ll dig deep on the fourth edition of the Abstract and your questions and comments are welcome. 10-1260 text or @Lowetide on twitter. Bring the big part of your brain!

That song about the midway

Blue Side of Lonesome