Two of my favorite hockey observers took a lash at prospect evaluation about a year ago. Steve ‘Dangle’ Glynn did a thing about the prospect pyramid and Jeff Veillette wrote some words. Both are here and worth a look. The idea being that a top 20 (or 25) forces the author(s) to make choices that take away from the overall discussion. Instead of talking about the player, we are talking about why he is ranked at a certain number. Great idea Steve, and great retort Jeff. Many moons ago (back in the HF era) I stole an idea from Bill James (his system was used to rank MVP-calibre seasons and to estimate trade value) for prospect evaluation. Here goes.

My idea goes like this (using Connor McDavid). At age 17, in his draft season, 97 was a “5” (impact junior) and that’s as high as he could go. The following season, I had McDavid as a “12” and this past season he is clearly a “13” on my list. That’s super nova. What would it look like if I applied it to the entire Oilers prospect list? 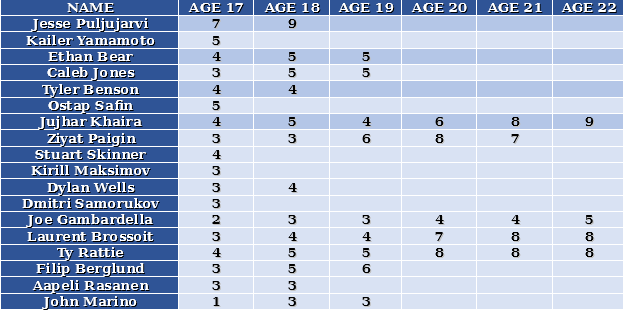 I’ve worked with this model for years, and despite some flaws (the European numbers seem a little high) it works for me as a quick evaluating tool. The best players (McDavid, Draisaitl) don’t get to age 20 before vaulting to the top of the list and then graduating. Jesse Puljujarvi’s career trajectory suggest the same kind of progression and we’ll see about Yamamoto (he might have more of a Jordan Eberle rise—5, 5, 5, 11, 12, 11).

Among the players entering pro hockey this season, Caleb Jones and Ethan Bear ideally have a Ty Rattie at 20 kind of season and get a cup of coffee. Ziyat Paigin, to me, is possibly ready to ascend to the NHL at any time during the season. He appears close to NHL-ready.

Sixes and Sevens and Nines

A Rational Look at Prospect ETA’s

A cieling based rating system for players is counter to the development of dynasty and constant competitive teams.

High repeatabilty of baseline is what you need.
For unit and position specific skills.

Boy, how huge (value that is) are these two contracts looking with ++ years left on them.

A bit off piste, but within the world of sports.

Hands down the best “silks” and the coolest looking team on the planet – not to mention great causes. Maasai Cricket Warriors – of which I knew nothing until this morning. No specific link – just goog it.

harvey has washed me ashore

Puts the ages in perspective and shows who is progressing and who is running in place.

Would be nice to see it every year.

You know its a solid news day when you are consulting the Regina Leader Post! LOL

I keed, I keed

Good for him. I enjoyed watching him in Oil Kings silks last year.

OK – now that I’ve read the blog again I understand completely. Not sure I’ve made sense of the “results” yet though but I leave that to the smarter statisticians around here.

I’m not sure I understood any of that tbh

Interesting way to view prospect progress for sure. Puljujarvi progress incuraging. On a side note, does anyone know if they made a custom helmet to fit his enormous head yet? Or are they not allowed to custom fit certain size heads due to NHL regulations?

Chiarelli did a good job with the Oilers D core. 1st pairing Klefbom-Larsson @ $4.16mil/ year each.
Nurse and Benning 3rd pairing pending RFA next season.
When Sekera and Russell contracts expire and all goes as plan Jones and Bear will be matured seasoned AHLers ready to set up.
Salary space is going to be tight, it’s not next season but the season after when they have to resign a starter and Puljujarvi.

Quality as always LT even though the Plante sighting reminds me of the ’07 draft. Sour grapes I suppose drafting a 3rd round ranking slow D 15th overall and then trading up to take Riley Nash over Max Pacioretty. Sigh. Here’s to one or two of these players hitting 11 & 12 in the next couple of seasons.

Rube Foster:
If you are going to “steal” an idea from anyone, you could do a lot worse than shoplifting from the Bill James store.

The resulting chart is a lovely way to monitor the development path of the Oilers Prospects!

Nice to see you post again, Rube, even nicer to see the kind words. 🙂

If you are going to “steal” an idea from anyone, you could do a lot worse than shoplifting from the Bill James store.

The resulting chart is a lovely way to monitor the development path of the Oilers Prospects!

I think the tournament starts next Friday – always fun and the first taste of real hockey.

Means main camp is right around the corner.

Interesting blog but I’m not sure I understand it – I will have to re-read it when I’m home from the office.