Lots of verbal around town about Ryan Nugent-Hopkins playing on the same line as Connor McDavid this fall. I think the idea comes from two trains of thought: This club needs to get Nuge’s offense back on track, and also find out if Leon Draisaitl can drive his own line away from Connor McDavid. Nuge’s numbers a year ago weren’t fabulous and giving him a push offensively could improve trade value. Leon Draisaitl has done everything but push the river solo, perhaps now is the time (although finding out before the big contract would have been a wise choice).

As for McDavid, my bet is he can play with damned near anyone. In fact, I kind of like the idea of Leon and Nuge on a second scoring line, possibly with Milan Lucic. At the end of the day, my suspicion is that we see 97 with 29 and big Patrick Maroon for much of the winter. I had a chance to talk to Connor McDavid last winter, when the top line was flattening the wild west.

Using that as a template, I imagine we see a lot of McDavid-Nuge together in the early days of preseason and the regular year. The two men didn’t play together much at all one year ago (less than seven minutes according to PuckIQ) but RNH is skilled at both ends of the ice. 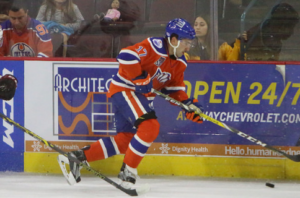 “Sammy Pollock used to say all jobs are open in Montreal but who was he kidding? Nobody was going to take Larry Robinson’s job or Guy Lafleur’s. In our camp I refuse to tell the players that. But I’d love it if somebody took a job away from a returning player. If that happened, that would make our team stronger.” Glen Sather, fall 1983

There are battles this fall but I’ll call them internal. As an example, I’ll list Ryan Nugent-Hopkins, Leon Draisaitl, Ryan Strome and Drake Caggiula as possibles for McDavid’s RW and may still have missed the actual guy. Hell, maybe Kailer Yamamoto grabs that job.

The thing is the answer seems so vague now but 12 months down the line the solution might appear to be as plain as the nose on your face when looking back. In August of 1980, Jari Kurri was a guy who didn’t speak English very well and was guaranteed nothing. A year later, he was one half of the most famous duo of the decade (and one of the most famous in the history of the game). The McDavid match may seem a distant bell, but the answer may come in a quick hurry.

The defense is going to see some battles too, especially for the No. 7D job out of camp. I have Yohann Auvitu as the winner, and any number of candidates for first recall. One name that looks obscure now but could come into view in a big way? Keegan Lowe. I’ll be interested to see his usage in training camp. Is he playing with an NHL partner? How deep does he go into training camp?

We do it every summer, probably will forever. When we discuss lines and pairings in summer, everything seems so clear. As soon as skates cut ice, the possibility of injury, added to good and bad conditioning habits by individuals and the keen eye of the coach all combine to turn things overundersidewaysdown. We’re guessing, we all know it, but it is impossible to resist setting things in stone.

The Oilers like Ziyat Paigin. I think they like him enough to have a look at him in the NHL later this season (depending on performance). He’s a big guy and has mobility, plus a terrific shot from the point. If Darnell Nurse moves up to second pairing by the end of the year, I bet Paigin gets a long look in training camp 2018.

A busy morning, TSN 1260, as we start getting back to hockey and the fall/winter to come. 10 this morning, scheduled to  appear:

SOMETHING TO TALK ABOUT

54 Responses to "WILD ON THE WING"