Based on some of the comments on the blog over the last 24 hours, there’s an assumption no one from the Young Stars tournament and rookie camp should be expected to make the NHL team this season. That is well short of accurate. Here are the men who made the Young Stars roster over the last several years and then played in the NHL same season:

Even with the allowance for lottery picks and their likelihood of making the parent team in the fall, these kids can play in the NHL in the season following their appearance at the Young Stars tournament. It is extremely likely to happen this season, despite the absence of a top 10 overall selection on the roster. Look for ridiculous talent, college men and Europeans. 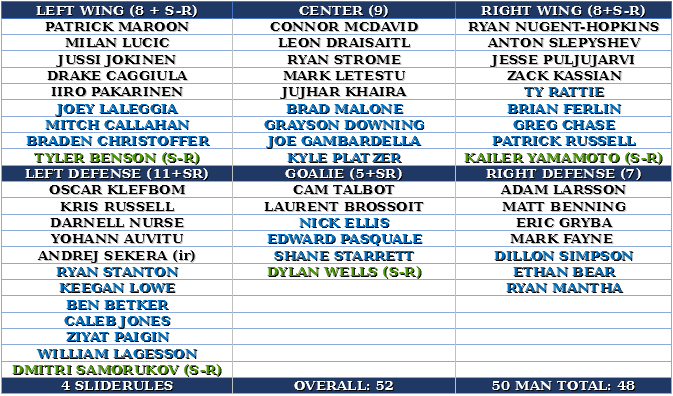 There were two significant developments in the ongoing Oilers roster story yesterday. First, as noted, the signing of Dmitri Samorukov to an entry-level deal. That makes four sliders, which is approaching a meal. The other item was news that Anton Slepyshev is injured and won’t be available until the season is underway. That’s a big one, and does increase the odds of men like Jesse Puljujarvi and Drake Caggiula playing on feature lines. It may also mean Ty Rattie or Kailer Yamamoto have increased their opportunities to make the big club.

The injury to Anton Slepyshev changes the equation again as we enter training camp. My plan was to run a ‘training camp roster handbook’ after the invites were announced, but today I’ll move up the “RW” portion of the post so we can have it as a starter for discussion. My rankings reflect chances of making opening night lineup.

A short week means extra fun on Friday, we kick start the weekend at 10 this morning, TSN1260. Scheduled to appear:

Isn’t Life Unkind (In My Life)?

HERE COME THE PEOPLE IN GREY

96 Responses to "WHEN SINATRA SINGS AGAINST NELSON RIDDLE’S STRINGS"