We have reached the point in training camp when the coach’s words should be listened to closely. He’s  the man tasked with getting this show on the road and Todd McLellan has an urge for going. He has a Stanley Cup ring, wants another one. He’s impatient for his team to get better and is going to look under every nook and cranny.

McLellan doesn’t have time to piss around here, he needs to see if Kelly can push Iiro Pakarinen or Jujhar Khaira to the end of the NHL roster. If we assume Khaira wins the 4L job, Pakarinen gets the 13F duties, that would mean Kelly is battling a skill winger (Rattie?) or a possible No. 8 defender for the final roster spot. I’m sure Kelly is aiming for a higher seeding, probably Khaira or Pakarinen’s job (or an injury could help).

It is as we discussed during the RE series, all over the map due to the injury to Sekera. After the top five blue (Klefbom, Larsson, Russell, Benning, Nurse) there’s going to be a lot of uncertainty until Sekera returns. Eric Gryba, the obvious 7D option this coming year, may move up to the third pairing for much of the season’s first half. 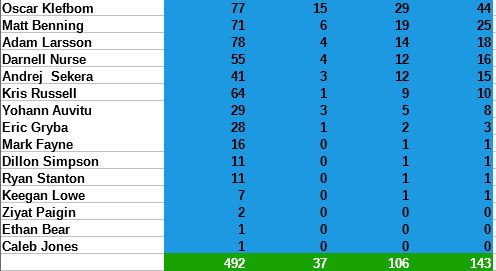 McLellan’s verbal above is exactly what we talked about this summer. The Oilers don’t have a Shea Theodore or a Esa Lindell to grab the open job. I basically kicked the decision down the road, reflected in five defensemen playing between 11 and 29 games. When McLellan talks about 8D, he’s probably not thinking keeping all eight in the NHL, but if he is then my RE may reflect his current thinking. I am telling you, a late TC trade is completely possible.

Late this afternoon, the Oilers sent five recent draft picks back to junior for the season. Dylan Wells, Stuart Skinner, Kirill Maksimov, Ostap Safin and Dmitri Samorukov all head back to their CHL homes and begin the 2017-18 campaign. This leaves just two junior eligible players, Kailer Yamamoto and Tyler Benson, still on the Oilers roster. All of the kids sent out today impressed during the last week and early arrows are very good for the 2017 entry draft.

(YOU WILL) SET THE WORLD ON FIRE!

OUR LONG NATION NIGHTMARE IS OVER

59 Responses to "BLUE MOON, WITH HEARTACHE"