The Edmonton Oilers won another game last night against an inferior opponent. The Vancouver Canucks didn’t dress an NHL team and I expect that organization was satisfied with the effort from their end. Edmonton’s crew had some wobble in goal and chaos on defense, but I’m not sure it’s fair to expect a jam up, jelly tight 60 minutes against a crew like last night’s opposition. Four games, four wins, and some real signs of excellent depth at the pro level and outstanding talent on the way. We’re one week in, the NHL players have held serve. What will this week bring us? 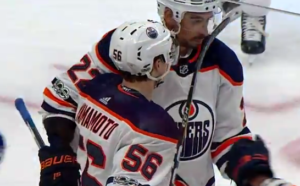 You can’t go fast enough to get there early, but you can flourish in the games put in front of you. Kailer Yamamoto’s hockey sense and tremendous skill were on full display last night. I was looking to see if he could create offense while playing with something less than a ridiculous center, the answer came back yes. I liked his power-play goal because it showed great instinct and quickness. People are locked in with their early bets now, forced to defend bets made long ago. I hope you find the time to enjoy what is happening here, this is a wonderful young player who does in fact have more offensive talent than any pure RW on the roster. Where that lands him is blowing in the wind.

Pakarinen entered camp with enough questions about him (coming off injury) to be less than a lock for the roster, but McLellan’s words suggest he is at least 14F as we proceed into the final full week of camp. That cannon of a shot is a useful tool, I always wonder why he doesn’t use it more and why they don’t try him on the point.

The game is still going, Filip Berglund has his first goal of the season. Looks like he is second pairing in this game and may be playing left side. All kinds of good arrows early in Berglund’s season.

The big Finn will play tonight based on earlier reports and will have an opportunity to answer the challenges of Kailer Yamamoto and Drake Caggiula. Anton Slepyshev is still idling in the driveway. Puljujarvi needs to announce his presence with authority, if not tonight then this week. It’s important to remember what kind of player JP is, and that success for him is going to look different out there. Jesse Puljujarvi is a brilliant prospect, I’d bet money he has a long and distinguished NHL career as a strong two-way winger and maybe even more than that when all is said and done. Young players don’t arrive at a specific time, you can’t make an appointment. Jesse Puljujarvi hasn’t yet made the Edmonton Oilers but a strong showing tonight will go a long way to getting it done. Young people sometimes need a break to go their way, to feel they belong, and perhaps that’s all that is left with Puljujarvi.

HERE COME THE PEOPLE IN GREY