Crazy Horse: Live at the Fillmore

The loosest rock and roll band worth paying attention to was probably Crazy Horse, around 1970. Neil Young and the band surrounded about 10 songs (one is here) and gave them a sound bashing over a couple of nights at the Fillmore while someone was recording. I love it to death, but it’s an acquired taste and you’d definitely want to tighten things up in the studio. By the way, the actual loosest rock and roll band in history is Alice Cooper, whose demo of “Eighteen” is unlistenable (it was on youtube but they shot it because it was too cruel to make people listen).

After playing a sound Game One against Calgary last week, the Edmonton Oilers have turned into Crazy Horse. Any team containing Connor McDavid is worth watching, but even then this group is testing the limits. Let’s hope this isn’t a winterlong experience.

WHAT TO EXPECT IN OCTOBER

There’s no reason to panic based on the team’s record, an early stumble can be easily overcome. The actual product is a concern though. After getting to even last night, the Oilers gave up two jaw-dropping goals in a quick hurry. One featured a risky play by Leon Draisaitl that left him out of position and a defensive pair (Kris Russell and Matt Benning) who backed in so deep Nikolaj Ehlers could smell Cam Talbot’s breath before he rifled home the game winner. No one had a chance to settle before the team’s five best players played ‘one day late and a dollar short’ on the fourth marker of the evening by the Jets. The six men on the ice for that goal (CMD, Leon, Maroon, the Swedes and Talbot) are the heart of the order, but they were Nadir’s Raiders on that play last night. Todd McLellan mentioned after the game that the team’s stars needed to be superstars every night, I think that fourth goal may have inspired the quote. Absolute zero moment. 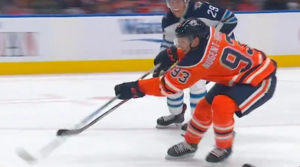 I think this is relevant, even though we are just three games into the season. A year ago, nine forwards and four defensemen had posted crooked numbers on the 5×5. This year, six forwards and two defensemen. That’s an entire set of five players who are missing from the score sheet. You can say Edmonton was running luck early and isn’t getting any right now, and you can also say the McDavid line is the only trio who showed well in both seasons.  Both of those statements may well be true, but the Oilers need more secondary scoring at the 5×5.

I don’t think the Oilers are a bunch of layabouts and don’t believe they have forgotten how to play the game. The things I value (as time goes on, fewer people who read this blog do value these things but that’s okay, I’m stubborn enough for all of us) suggest this team has most of the formula in place.

How can this be? Well, there are a few reasons generally associated with this malady. Most of the time, you can blame the goalie and be on solid ground. Cam Talbot has had some wobble early, but he’s also stopped several breakaways and countless point-blank shots. I’m absolutely not going to bury him over this start.

For me, the culprit is puck handling in the defensive zone. The Oilers are making tragic decisions all over hell’s half acre in their own zone, and it is creating chance after chance for opponents. Last night, Milan Lucic was along the boards in his zone, saw his center hovering, and sent a tip pass toward his man. However, the Jets had a man hovering too, and he was closer and heading in a great direction for his team. Bang! Lost possession and we’re in the zone for another 30 seconds unless there’s a goal.

Have a care! This is basic hockey and every guy on the ice knows it. I don’t look forward to hearing about how lazy and stupid this team is over the next several days because they aren’t either of those things. What are they? Too cute, I’d say. That first game was close enough to perfect that we know they have it in them.

Even down a man on defense and struggling to find something that rhymes on RW offensively doesn’t excuse lack of execution in the defensive zone. The Edmonton Oilers aren’t making things easy on themselves, but as they stand here today this group is far better than they’ve shown since the weekend began.

We’re back and have (mostly) slept off the turkey. It begins at 10 this morning, TSN1260. Scheduled to appear:

(Gonna walk) Before they make me run

TOOK HIM MINUTES, TOOK HER NOWHERE

95 Responses to "Crazy Horse: Live at the Fillmore"