The Edmonton Oilers are 3-6-1, have stated publicly there’s going to be a shuffle and every media person with a microphone is repeating “right wing”, “speed” and “shopping” in regard to Peter Chiarelli. Either the game is afoot or the Halloween trickery is more creative this year.

Back in training camp, Jesse Puljujarvi had a clear shot at winning an NHL job—but Kailer Yamamoto beat him out and won the roster spot. For Puljujarvi, it had to be a major disappointment. For Peter Chiarelli, it eased some of the cap worry with a big $2.5 million in cap bonus tucked away in Bakersfield.

We may be approaching the point where the big man returns to the NHL. The auditions on RW at the NHL level have been a mixed bag, as reflected in the current 5×5/60 scoring numbers for the men who have spent some time patrolling the position.

Last season Jesse Puljujarvi pulled down 1.45/60 before getting sent out, including 2.86/60 in 84 minutes with Connor McDavid. A team so badly in need of help at a position is a little bit blessed in having a No. 4 overall selection matriculating on the farm. JP has three assists in seven games, with 22 shots on goal. If he is recalled, a good bet he’d get time on the second or third line based on the Connor McDavid-Leon Draiaitl success we’re seeing this season (McDavid is 4-2-6 and Leon 1-5-6 with each other in 73 5×5 minutes).

I like JP’s size and speed, his abandon and was really surprised by JP’s ability to win puck battles even as a kid. He also ends up on the right (defensive) side of the puck a lot, more than any Oilers prospect winger since Magnus Paajarvi. He has a complete skill set. He may not be a big time scorer but there are all kinds of things he can do that help a team win. 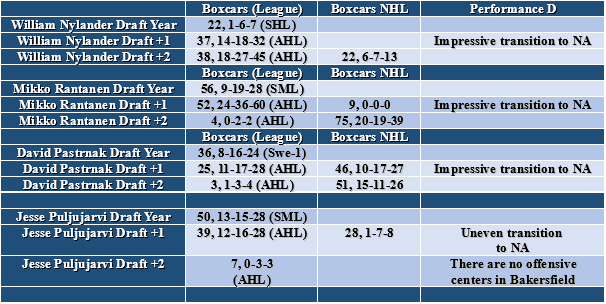 Recent draft and development history gives us a chance to track Jesse Puljujarvi against somewhat similar talents. Although his transition to the North American game was less impressive than that of William Nylander, Mikko Rantanen and David Pastrnak, young Puljujarvi is in the range and this appears to be right as the time of ascension.

It seems like the rational next step, calling Jesse Puljujarvi to the NHL and making the call on Kailer Yamamoto. Fair? I don’t think it makes sense to run both men on the 23-man roster, not this year. The other option is trade, and that’s possible. We wait.