I’m looking forward to tonight’s game, the Edmonton Oilers have played well enough in recent games to give fans some hope for a competitive 60 minutes. It’ll be a difficult test against Columbus, and a loss means another disappointing road trip, but there are some things to anticipate as we go about our work today.

Some snappy stuff in the last 24 hours and a big day today!

This is the least successful December of Todd McLellan’s Edmonton tenure but there are some good signs in the first half of the month. G5 in 2015-16 was a 7-5 win over NYR and a year later it was 6-5 Philadelphia as Edmonton gave up three unanswered in the third period.

G31 in 2015 was a 3-2 overtime win over Boston, Andrej Sekera is so strong in that discipline. Last year it was a 3-2 win over Winnipeg on a third-period Mark Letestu goal.

One of the difficult things about the current Oilers is we haven’t seen them good very often. Based on the first 30 games, I wouldn’t have them as the favorite in many games now through the end of the month. Edmonton needs to change their reality, and have some good arrows (McDavid being No. 1 arrow).

"He's been skating. He's symptom free. We will get him in some contact practices this week. We hope he's ready for this weekend." Gerry Fleming with an update on Ethan Bear who has been dealing with a concussion.

This is a terrific bit of news, Bear is an important prospect (I have him No. 3 in the system currently) for Edmonton. A righty blue who adjusted quickly to the AHL before injury (8gp, 2-3-5) needs to play a lot in his rookie year in pro hockey. 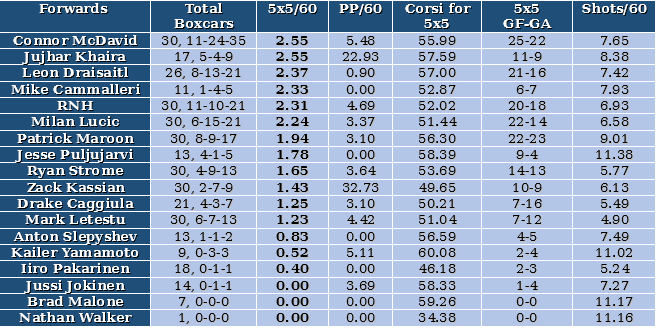