Tonight’s opponent, the San Jose Sharks, will bring back many good memories for Oilers fans at Rogers Place this evening. My favorite playoff game last spring was G2 against the Sharks, Edmonton winning 2-0 on goals by Zack Kassian and Connor McDavid. They lost Game One in overtime, Melker Karlsson scoring on the 44th shot of the night (Edmonton had 19 in the loss). Cam Talbot played well enough to steal the first game, but needed only to make 16 stops in the second game. The young Oilers overcame the Sharks in Game Two and the took it from there. Both goals shorthanded, the Oilers were on their way. They lost Game Two? It might have been a sweep.

CONNOR MCDAVID: THE ATHLETIC PERSON OF THE YEAR

Connor McDavid is The Athletic’s Person of the Year for 2017, article is here. McDavid’s arrival in our city changed the atmosphere, gave fans the ultimate prospect and he has delivered in every way possible. In the article I suggest (correctly) that the story of the year in Edmonton is 97 signing that 8-year deal. Hope you have time to read it, I enjoyed writing it and talking with his agent Jeff Jackson (and others) in preparation for it. Connor McDavid is a remarkable young man.

Great Christmas offer! Includes a free 7-day trial so you can try The Athletic on for size free and see if they enjoy the in-depth, ad-free coverage on the site. If you don’t feel it’s worth the $4.49/month, cancel anytime during trial before getting charged. Offer is here.

G8 December 2015 was a 4-0 loss to the Chicago Blackhawks, last year it was a 3-1 loss to Sam Gagner and the Vancouver Canucks. A win tonight puts this year’s team within range of the other two seasons (currently 12 points, 9 points and 8 points) and that’s a good sign. Big, big game tonight.

AFTER 34, YEAR OVER YEAR

G34 in 2015-16 was a 5-1 loss to Colorado, Connor McDavid hadn’t played since November 3 and wouldn’t play again until February 2. A strong December start allowed the Oilers to remain on the outskirts of hope but it would be a rough ride from here on. Last season? The opposite. Edmonton would win G34 by a 3-2 score (Nuge the winner in overtime), winning their 17th game and establishing a 17-12-5 record. The 2016-17 Oilers would post a 30-14-4 record from here, on the way to a 47-26-9 conclusion. Should this Oilers team duplicate the feat, we would see a final record of 44-31-6, good for 94 points. Would that be enough? Of course, that’s not even the question we should be asking right now.

This is it! By the end of this week, we could be talking draft (I refuse until January) or we may have something to look forward to in January. I’ve been genuinely impressed with this team’s efforts since the Philadelphia game (3-2-0) and if the team goes 4-2-0 in the final six games we’ll see 8-5-0 for the month and 18-20-2 for the season. Still so far back, but December would represent some encouraging recovery.

He’s finally going to see power-play time tonight and the goals are coming. Jesse has been impressive a potentially complete winger since arriving but the offense was a little shy. This current run, since his recall, is putting that final question (where will the goals come from?) to rest.

There’s your answer. Todd McLellan was patient, some will say overly patient, with this young player but if this is in fact his arrival as an NHL 20-goal scorer (or more) then the timing is just about perfect. 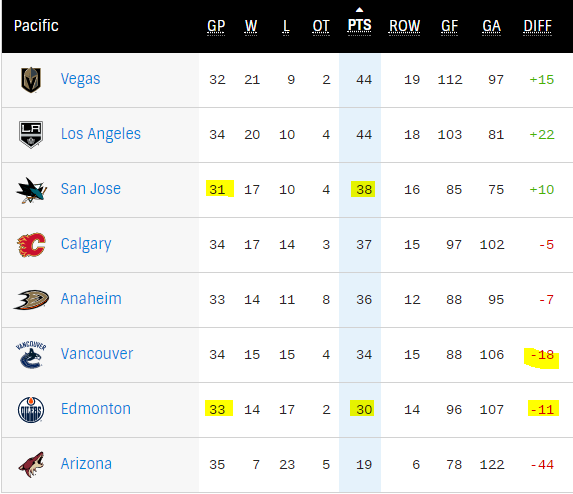 The Oilers will eventually pass the Canucks, partly because a pestilence of injuries  has hit the lower mainland. Based on goal differential, it’s a quirk Edmonton is beyond them full stop. Anaheim and Calgary are still in sight but the Oilers must post a winning streak in short order and home victories are going to be vital. The games against the Sharks (as in tonight) are doubly important because SJS have games in hand. A win tonight in regulation puts the Oilers six points back, but those two games in hand are a helluva kicker.

At 10 this morning, a packed Monday just ahead of a massive game for the Oilers. Scheduled to appear, TSN1260: