By the end of this month, we’ll know which way the wind blows. Seasonal coverage will continue every morning here, but if the playoffs become a distant bell, we’ll drill down on the draft. Edmonton has a lot of picks this year, my early view of the consensus lists has about a dozen great defensemen and less than 10 great forwards. Considering the spot Edmonton is likely to draft, that means blue on blue. Not ideal based on Edmonton’s established needs.

Great Christmas offer! Includes a free 7-day trial so you can try The Athletic on for size free and see if they enjoy the in-depth, ad-free coverage on the site. If you don’t feel it’s worth the $4.49/month, cancel anytime during trial before getting charged. Offer is here.

It’s a stretch to suggest the Oilers are going to pick fifth overall, but we’re approaching the halfway point of the season and another slump probably means draft talk. The value of a No. 5 overall pick to a team that already houses Connor McDavid, Ryan Nugent-Hopkins, Leon Draisaitl, Jesse Puljujarvi and Darnell Nurse is clearly enormous. The elite cluster could always use another knight. If this team drafts No. 5 overall, there will be changes.

I think the Oilers, if they’re drafting around No. 15, are going to get some nice options. I think the top eight players will be gone, but one of Woo, Merkley and McLeod may be available. Miles to go, centers and blue are going to be the best options when Edmonton is on the clock. Pretty sure.

Yesterday, the Edmonton Oilers made a flurry of moves and there may be one more today. Let’s review all of them before we get to the new 50-man list:

Greg Chase has real talent, although it didn’t shine in the minors during 2+ seasons in the Edmonton system. I ranked him No. 51 in his draft year, he was chosen No. 188. It didn’t work out in Edmonton, hope it does for him in Florida. Mark Fayne gets to play the final stretch of his contract out east, wonder if he sees the NHL again. I think he can still play.

Oscar Klefbom going on IR feels like it could have happened at any time and is a damned good idea. Let the young man heal, get him back in a week and see if he continues his climb toward Top Oscar. Anton Slepyshev is among the 12 best forwards on this team, don’t think Todd McLellan thinks so, though. Sail on, Nathan Walker, we hardly knew you.

WHO COMES OUT OF THE LINEUP?

Once Andrej Sekera is activated (right soon!) and Klefbom returns, who comes out of the lineup? My guess is injuries and slumps will dictate, but we would be wise to remember Sekera may not be Sekera right away. 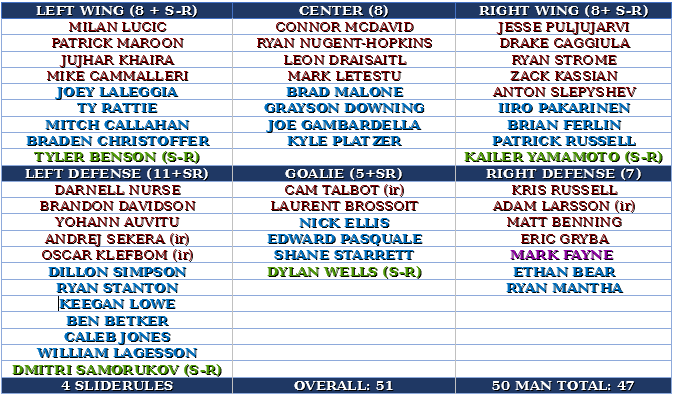 This assumes Nathan Walker is plucked off waivers, Bob mentioned yesterday several teams put in a claim at the same time as the Oilers. The biggest in-season addition (for the franchise) is clearly Jesse Puljujarvi, I think, but Mike Cammalleri and Brandon Davidson have helped, too. Mark Fayne remains on the 50-man. 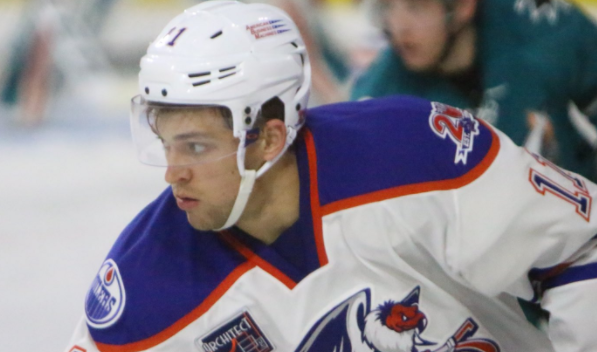 Several of you have asked me about Brian Ferlin. He hasn’t played since December 3, and this is a good story waiting to happen. Is he hurt? We’ll find out this morning from Ryan Holt. Photo by Mark Williams, who is a worthy follow.