During Peter Chiarelli’s conversation with Ryan Rishaug yesterday, one of (several) interesting subjects discussed was the trade deadline.

It’s over. The pro meetings will no doubt cover subjects like “finding the next Patrick Maroon” and “does Cody Franson have trade value?” with trading out beginning as early as the All-Star break.

G5 January in 2015-16 was a 4-3 overtime loss to the Arizona Coyotes (OEL) and last year was a 5-3 loss to the San Jose Sharks. The Oilers are getting absolutely pounded in January 2018 and Nashville is a damn good team. This could get ugly.

AFTER 44, YEAR OVER YEAR

At this point, there’s no use predicting when the Oilers will win because they’re beating themselves. If they show up tonight, the club could win. If the Preds get the first goal, and then another, find a comedy and check back at 15 minute intervals.

Cody Franson is better at the job Matt Benning has than Benning is right now. But Benning is 23 and the season is lost, so…

I’d put in a claim, and look at dealing someone at the deadline. Defensemen always have ridiculous value at the trade deadline and we’re seven weeks from it. Do the Oilers have room? Yes. 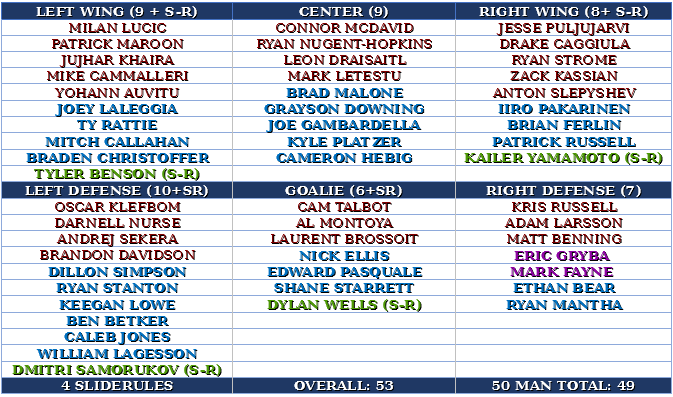 All appears to have settled down for the Oilers, for the time being. At this point, no off-ice changes contemplated.

It feels like change is in the air but things will have to be finessed a little. When a general manager is in trouble, you’ll often see a bizarre trade to save the day, we haven’t seen that from Peter Chiarelli. He didn’t see a palace coup coming last time, so maybe history is about to repeat.

There’s no strong reason to remove Chiarelli today, beyond offering a sacrifice to the fans (that does have a role in this, in my opinion). If you are actively hoping for a Chiarelli firing, this tweet may indicate the attempted coup has failed for now.

In each of the summers of his regime, PC has made a major trade that bled talent. That is now the pressure point for the fanbase, but the old bulls in management would have signed off on the Reinhart, Hall and Eberle deals.

That’s a concern that we should address, in my opinion. The entirety of Oilers Nation is focused on getting rid of Chiarelli, while not worrying much at all about the powers behind the overthrow and the new king.

There’s every chance Chiarelli’s firing will be followed by a honeymoon period and then a grand summer of ‘name’ acquisitions. That isn’t what these Edmonton Oilers need, ladies and men. The club needs astute procurement in a few places and it needs that procurement right damned now. Cody Franson, Anthony Duclair, these are players who are either available or rumored to be available. Maybe they don’t work out, but you have 40 games of audition in front of you.

I’m not telling you to lay off Peter Chiarelli, he has created his own reality. I would ask you spend a moment contemplating his replacement and how much experience that man (or those men) have in the job. The Oilers don’t need Sam Pollock or Glen Sather but an intelligent, mature and measured approach is required. All is not lost, but it could be, and if the job was easy it would pay minimum wage. Beware the future created when men who know not what they are doing are given great responsibility. With that in mind, I believe Kevin Lowe is the best available from the front office but I think the next general manager is going to be the most famous former hockey player on the planet. I expect it comes in the next seven days, or mid-April.