Here’s an off day, meaning we get a chance to catch up on a few things. I have a few thoughts that have been rolling around in my brain, today’s a good day to get them out. One of the things we’ve done this winter is make everything black and white and I want to push back against that idea. In our zeal to prove ourselves right and others wrong, we’ve used hyperbole to push the narrative and perhaps missed the big part of the story.

What’s the big part of the story? This Edmonton Oilers team has an enormous base of young talent. The margins for winning and losing are so razor thin in the NHL, the Oilers (and Senators) could be right back in the final 8 (or better) next spring (2019).

This is a miserable season and there should be a reckoning, whatever that moment may hold. Let’s not lose sight of the big picture, the reason why getting the management and coaching is so important. There is dual work for a manager, build the system and push the NHL roster to greatness. Who is the man that can make this thing wheel? I do not have your answer. I will say it’s not complete darkness and you should remember that about this Oilers team. They have a wonderful story to tell, just not this year. 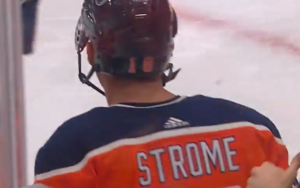 Back in the summer, back when Jordan Eberle was being traded for Ryan Strome, we talked a lot about the team in 2017-18 and the overall organization depth at forward.

I have a few things wrong (was looking at the good draft work done by PC’s group, and also thinking the McDavid-Talbot magic would hold for a second season), but the prospects are coming around (although they are some ways from landing) and I maintain the Strome story doesn’t have to end badly (nor should it end after 44 games).

You can’t find many who have much good to say about Ryan Strome but this is early days. Strome didn’t get himself traded for Jordan Eberle, so let’s talk about the player. Here are his year over year numbers:

That’s pretty close folks, not much difference one season to the next. His shooting percentage regressed but 13.75 was unrealistic for 5×5. Needs to shoot more, he had good linemates both seasons (43 percent of his time with Brock Nelson last year, 33 percent with Leon Draisaitl this year) and isn’t playing much with Connor McDavid.

I know it’s sexy these days to bury everything Peter Chiarelli touched, I understand the disappointment of another season at the bottom of the coulee. Strome isn’t dynamic but that doesn’t mean he is incapable of playing a complementary role. If the club can get him on a reasonable contract, Strome could be part of the solution next season.

Ethan Bear is one of the emerging stories at the pro level this season, I’d rank him just behind the NHL steps made by Jesse Puljujarvi and Darnell Nurse. You never know with defensemen, all you can do is track their response to challenges and assume there isn’t a Denver boot in their game that will keep them from becoming an NHL player. Our man Bear is at least a year away by my estimates but there are good arrows.

That’s some nice company, the Oilers have at least two (Caleb Jones) legit defensive prospects in Bakersfield and who knows maybe a third (Ryan Mantha). This blog tracked a trio of college men (Jeff Petry, Taylor Chorney, Cody Wild) a decade ago, the lesson being one will turn out, one will not make it and a third will be a tweener. We don’t have much separation yet between Bear and Jones, perhaps that’s a good sign.

TRADE BAIT: The countdown to #TradeCentre is under way and @frank_seravalli provides an updated list with 20 names to keep an eye on https://t.co/fHo9m6CZ0e #TSNHockey pic.twitter.com/ZiwYwnvt4j

Mr. Seravalli has two Oilers on his list (Patrick Maroon, Mark Letestu) and they should fetch something of use (my latest article at The Athletic discusses some possibilities).

Ideally the Oilers grab a plug-and-play option for Maroon, maybe a mid-round draft pick for Letestu. Mike Cammalleri may also get dealt, I’ve been impressed with him in the last several weeks. What about blue? Brandon Davidson? Matt Benning? I’d keep both men.