We’re at (about) the halfway point of the season and it is a good time to have a look at NHL equivalencies. I like to use them as a quick overview, important not to project them as actual factual. You can see things at a glance across several leagues and in the case of forwards identify the group of players who still have a chance to emerge on skill lines in pro hockey. 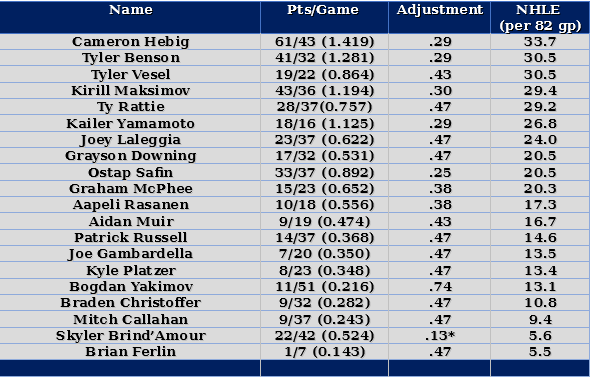 Fussy britches has the Maple Leafs interested in Oscar Klefbom, it’s a noxious idea from start. I follow myriad Toronto fans and bloggers, all of whom agree there’s no way Mitch Marner or William Nylander are going anywhere. This quickly gets you to ‘there’s no deal that makes sense’ but one imagines a full day of twitter bringing up names like Kasperi Kapanen, Connor Carrick, Connor Brown and Andreas Borgman. No thanks, I’ll pass on trade discussions in this regard. It is insane to trade away young players who are established in the NHL and have excellent contract. Beyond foolish.

Anton Slepyshev is gone, just a matter of NHL or KHL at this point in my opinion. Some hold out hope he’ll get back in the lineup with Nuge out, my suspicion is that Iiro Pakarinen gets that gig. Patrick Maroon, Mark Letestu and Mike Cammalleri are all more likely than not to be dealt and I do think we could see a defenseman (lesser of Klefbom) being traded at the deadline.

As for management, man I’ll tell you the verbal around this city is crazy. If you made me guess, the two scenarios that appear to be playing out are:

How good would this game-worn Cam Talbot mask look in your Man Cave? Bidding is open at NHL Auctions, proceeds to @SportCentral_AB.
He'll wear it Saturday v. @Canucks on HNIC.@NHL @kellytrainhttps://t.co/GKe9GzZHqq pic.twitter.com/1zTwmfCh0S

That’s a beautiful mask, ladies and men. Great cause and worn by the man who guided this team to its first playoff games in a decade.

A busy Friday and things could get loud! At 10 this morning, TSN1260, scheduled to appear: