Don’t let the sun catch you crying. On November 1, 2008, I wrote a brief entry on this blog, pointing out a fabulous evening for Edmonton’s latest first-round pick and trumpeting the team’s scouting director: Jordan Eberle has a hat-trick tonight, and as of now his WHL stats read 17gp, 14-12-26, +4. That would put him in a first place tie in goals and tied for second in points. Stu MacGregor, you magnificent bastard. Almost 10 years later, it is still confounding things worked out as they did in those seasons. Opportunity missed doesn’t begin to describe what happened to the Edmonton Oilers. The insistence on a ‘five-year plan’ and lack of balance and urgency have combined to sewer a generation of young talents. When will it end?

Edmonton has a chance to get back to even in March tonight, the Islanders are beyond desperate at this point and it should be war. I watched Calgary flatten the Sabres last night, that should be the kind of effort we see from New York this evening. It could get ugly, mostly because both teams are flawed. Danger, 1980’s straight ahead!

AFTER 66, YEAR OVER YEAR

The 15-16 season is not much of a hurdle, but this year’s Oilers have been unable to wrestle it to the ground. The schedule isn’t easy, we’ll see how long it takes the team to reach 70 points (the final total for that 2015-16 club). A long winning streak, still eluding the Oilers after 66 games, needs to arrive soon before the season runs out of track.

How many wins do you see for the rest of March? I have Carolina, Los Angeles, Columbus and Vancouver. Can Edmonton get five more wins this month? 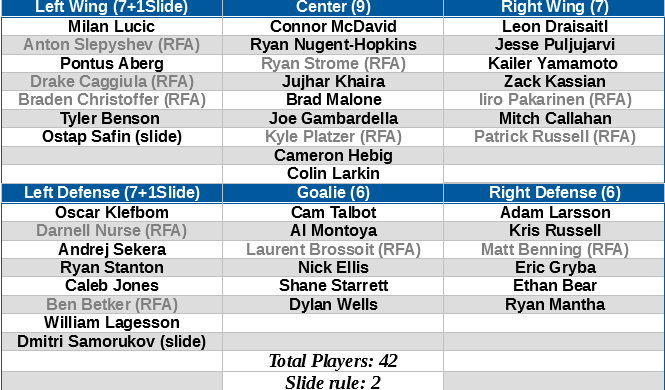 A busy Thursday, beginning at 10 this morning on TSN1260. Scheduled to appear: