The Edmonton Oilers recalled Ty Rattie to the NHL yesterday, he should get some games between now and the end of the season. Thinking alongside management, now that the Condors playoff chances are sunk, might as well see how he shines in Edmonton. Question: What job might Rattie be applying for next season? 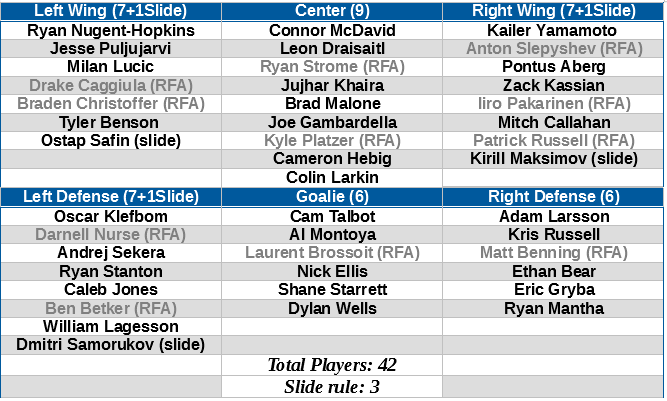 Ty Rattie is an unrestricted free agent, if the Oilers signed him (over Brian Ferlin, the other UFA right-wing), could he compete for an NHL job in the fall? My guess is no, Todd McLellan had him last fall and sent him to Bakersfield despite some real issues at skill right-wing. Rattie had a good year in the AHL (21 goals tied for his second-best minor league season) but I see Jesse Puljujarvi, Kailer Yamamoto, Pontus Aberg and Zack Kassian as clearly ahead of him. Early recall? Sure.

Who will Rattie replace in the lineup when he jumps in this season? It could be any number of wingers but it sure as hell shouldn’t be Puljujarvi. Give the kid at-bats! Lots of them!

I think we can (depending on what kind of feature deal management comes up with) count on McDavid, Draisaitl, Nuge, Puljujarvi, Lucic, Khaira, Strome and Caggiula for next season. If we look for pairs, that might mean Nuge-McDavid, Lucic-Draisaitl, Puljujarvi-Strome and Khaira-Caggiula.

Kailer Yamamoto would make the team as a skill winger, or not at all. Zack Kassian would be a candidate for 4R if he isn’t dealt. The contract may force a trade. There will be a feature trade but it might involve the pick plus Oscar Klefbom (is my guess). As I have mentioned, this much madness is too much sorrow but Peter Chiarelli is an aggressive general manager badly in need of a brand new plan.

My preview of summer? I’ve said it many times but Nuge for Tyson Barrie and Klefbom for a scoring winger is the next chapter in a Peter Chiarelli ‘war games’ restructuring.

I think we’re likely to see three major veteran additions (represented here by Mike Hoffman, Tyson Barrie and Anton Khudobin) under the Chiarelli plan. I also think Brady Tkachuk might be the the first-round pick, who gets signed and inserted in the “Aberg” slot on opening night. I do not endorse this plan.

This is an important one, Maksimov is a legit scoring winger in the OHL. His progression in Draft+1 (21 goals to 33 this season, in six fewer games) suggests we’re dealing with a real straight shooter. Edmonton isn’t going to cash on all of these depth picks, but if even one of Maksimov, Safin or Samorukov has an NHL career it will signal success compared to this organization’s own past. The club is drafting players who own resumes on draft day that suggest there is a useful talent involved. It’s a long and winding road, but it begins with one step.

At 10 this morning, I’m back baby! Hopefully the voice holds up because my guest list is strong. It’s all on TSN1260, scheduled to appear: