Yesterday, the Edmonton Oilers made a significant trade that will (probably) impact the pro depth chart in the fall. We’ll continue to monitor the current team, and the major storylines (McDavid Art Ross, Leon Draisaitl 80 points, Jesse Puljujarvi 15 goals, et cetera). However, it’s also time to look forward to the summer, and what may come.

GOD ONLY KNOWS, YEAR OVER YEAR

Oilers have now passed Chicago (now No. 24) and there are a few more teams who are vulnerable even this late in the year. Edmonton could pass the Islanders, Rangers and even Carolina, conceivably finishing No. 21 overall. That hurts the draft number, though.

AFTER 73, YEAR OVER YEAR

A win tonight gets Edmonton to 71 points, exceeding the final number for 2015-16. The club would still be 32 points behind the final tally of one year ago. It would be nice to see that goal differential tighten some more.

The home stand to come is likely to poke a hole in this month, but the stronger play of Cam Talbot and Connor McDavid pushing should mean some success. Tonight’s game is going to be emotional, the Sens have played Edmonton very well in those circumstances. That said, the story surrounding this game is so incredibly sad that none of this matters at all. Absolutely devastated for the Karlsson family.

If the Oilers sign Marody, he’s going to be a feature player in Bakersfield next fall.

This is a list of signed prospects, NHL men likely to spend time in Bakersfield and the RFA’s. I don’t expect we’ll see Ben Betker and Kyle Platzer return, not certain about the other gents. Marody is listed as a center so I put him there, could easily end up at right-wing. No matter what we think of the quality of these men, there are far more forward prospects in the conversation than one year ago. And most of the newcomers boast skill as a main asset.

Also in there, Panthers prospect Adam Mascherin (2nd-round pick) has told the team that he's not signing, so Florida looking to move him: https://t.co/ZjIq8H2Y1I

I had Adam Mascherin No. 22 on my final list and he’s performed well since draft day. Whatever the issues facing player and team, the Oilers would be wise to consider grabbing this young man via the trade route (depending on price). 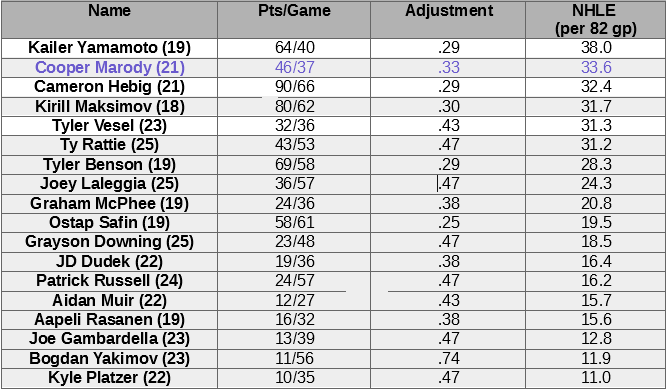 A busy Thursday on the show, as we gear up for tonight’s game versus the Senators and talk about the GM meetings. Scheduled to appear, TSN1260 beginning at 10:

A Preview of Coming Attractions