A big red beacon, a flag and a man on the rail

The biggest news over the weekend surrounded a Finnish goalie playing in Russia and running a pretty strong save percentage. The Oilers are running a string of unusual decisions in goal and that sets up summer in a Mystery Science Theatre way. What will happen? Stay tuned, and bring your inner smartass.

The club got max deals on McDavid and Draisaitl, lost Reinhart, didn’t get a second pairing defender and replaced Sekera with Kris Russell. Got Strome but traded Eberle for him in order to find cap room (they wouldn’t need the room until this summer). 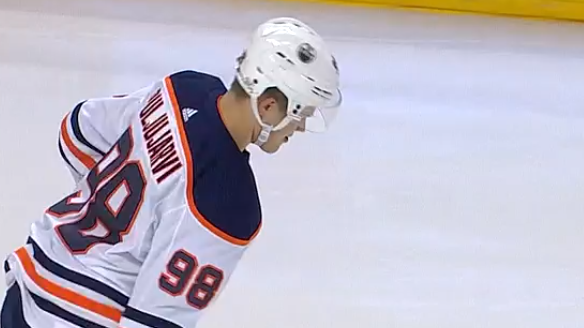 Most likely to least likely.

On Koskinen from story: The 29-year-old former 31st overall pick is expected to sign a two-year deal with the Edmonton Oilers with an AAV of $2.5mil per season. https://t.co/uNHJilFXnN

Hmmm. I wrote about Koskinen yesterday, here and at The Athletic, and if this number is true then the Oilers must love this goaltender. Perhaps the club got into a bidding war with the NY Islanders (Garth Snow!) but this pokes a hole in the limited cap budget left. If this is true, I’m going to bet the Oilers plan to trade a $4 million plus defenseman.

CAN THE OILERS DO THIS?

Yes, but it looks like an unforced error if true. A two-way deal with an AAV of $1.25 million seems far more reasonable. Here is a way Edmonton could construct the roster with this contract at $2.5 million per year.

We have so many avenues we can go today, the show remains fluid but we’ll bring it I promise. At 10 this morning, TSN1260. Scheduled to appear: