Saturday night brings us another draft lottery and as you know the Edmonton Oilers are the kings of that game. I wrote an item for The Athletic this morning, about what would happen if Edmonton won the lottery, the impact of Rasmus Dahlin, and the likely popularity of the phrase ‘Dahlin-to-McDavid” in the coming years. I hope you have the time to read it. He’s a special player.

I have completed the Top 120 list, planned to publish it on Monday. Would you like to see it before or after the lottery? Let me know. I can publish tomorrow of Friday morning if that works. Here’s my latest mock if the Oilers finish No. 9.

While I have a minute, want to reiterate how my list is put together. I publish the final list June 1, long before the professional lists are out. I do pay attention to Corey Pronman, Scott Wheeler, Bob McKenzie, Craig Button, The Black Book, Simon Boisvert and several others who will be noted when I publish my updated list. I also have some support from the scouting community (basically making sure these prospects have 10 fingers and toes).

Math is king for my list, that’s what makes it unique. Gabriel Desjardins and Rob Vollman originated and tweaked NHLE’s, respectively. I think an NHL team could go a good job just by sussing out the math of the draft, maybe place it alongside Bob McKenzie’s list.

Finally, when I publish the final 120 on June 1, I will be adding a ‘touch list’ featuring players who I like but don’t have enough information on. They could be draft and follow options. 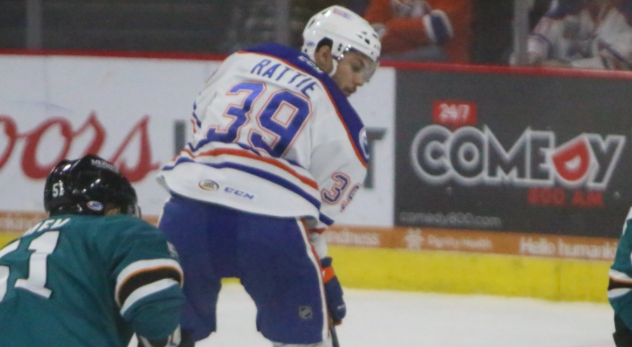 How bad was it? We know the Bakersfield Condors didn’t have many forward prospects pushing offense last season, but how did the efforts of last year’s team compare to Oilers farmhands past?

The fabulous site prospect-stats.com gives us a chance to compare seasons and therefore prospect snapshots (through the past, darkly). I’ve chosen primary points (it’s a gooder, like God’s flashlight with fresh batteries) and here are the notables in 5-on-5 primary points per 60 for Oklahoma City Barons. I’m listing all forwards, prospects in blue.

Reddox would spend significant time in the NHL during the 2010-11 season, then head to the SHL where he carved out a nice career. Linus Omark would also spend time in the NHL during ’10-’11, and posted some impressive offensive numbers. I think there was an NHL player there. Mark Arcobello, Colin McDonald and Chris VandeVelde would all carve out NHL careers of varying degrees. The 2010-11 team produced no long-term solutions for the Oilers, none remain in the NHL.

Remember this is primary points per 60, so heavily reliant on the player in question. Ty Rattie was easily the best Condor forward this past season, but the big issue is how few players reached even Colin McDonald’s level. The Oilers simply didn’t have enough skill a year ago and that must change.

At 10 this morning, TSN1260. I am loving the lineup today, we should have a lot of fun. Scheduled to appear: