Extra Texture (Read all about it)

Last summer, during my “The Davenport Hotel” look at every Oilers prospect and where they were heading in 2017-18, I wrote the following about Jesse Puljujarvi:

That was July 3, and at the end of the month (during my RE series) I projected Puljujarvi to score 14 goals and 28 points in 65 games with Edmonton. The big Finn played in exactly 65 games, scored 12 goals and 20 points.

Forwards from the last three 1st rounds & played in Liiga in their draft year:

There are all kinds of good arrows for Jesse Puljujarvi, here are a few:

Edmonton needs JP to emerge as a quality NHL player, whatever that may be in his case. I’ve said all along we might be looking at a quality scorer or a quality two-way outscorer, but whatever that looks like the club needs him pushing every night beginning in October. Puljujarvi after two seasons has a lot in common as an offensive player with the good (Mike Cammalleri, Jaden Schwartz, Ryan Johansen, Mikael Granlund) and the not so good (Taylor Pyatt, Nikita Filatov, Alex Nylander). A big year ahead. I have Rob Vollman on the Lowdown today to discuss Puljujarvi’s comparables and possible future.

Every draft morning since the McDavid edition I publish a “Here comes the Sun” post. It includes my rankings for that draft, a few notes and basically serves as a comment post until the team makes a selection. I’m not sure the Oilers will pick on the Friday night but I’ll continue the tradition in the hopes the teams adds to a list that includes Connor McDavid, Jesse Puljujarvi and Kailer Yamamoto.

Today, I’d like to go back to that list of 150 players from a season ago and see the names who didn’t get picked, and if they still warrant draft consideration.

There are more from my list of one year ago, we’ll touch on those names before draft day. Among the group listed here, I would suggest Kosorenkov and his goal scoring prowess would rank as the most likely player to be chosen this time. 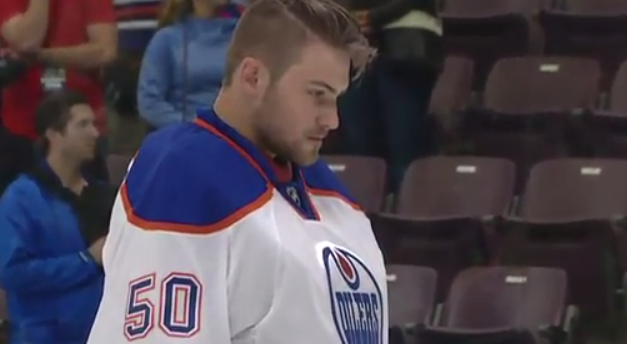 WHAT ABOUT A GOALIE?

Edmonton has been drafting goalies often since Peter Chiarelli arrived in 2015 (three in three years) and maybe we’ll see it again. There’s a bottleneck forming with Dylan Wells and Stuart Skinner both turning pro this fall, Edmonton may want to draft a goalie who is potentially five years out like Purpura on the list below.

CSKA Moscow have acquired rights to Anton Slepyshev from Salavat Julaev UFA. Slepyshev is expected to sign with the Moscow team.

At some point, blaming the players simply isn’t enough. The failure of Edmonton’s procurement department over many years includes bad bets and obscure alternatives, but holy lord these kids died on the vine 10 at a time in the AHL. Godspeed, Jay Woodcroft, there has to be a better way. I suggest playing these prospects. Crazy train idea, maybe it works.

I’ve been hesitant to write about this because it isn’t a story and probably won’t be one, but it could be. Kind of like an offer sheet. Edmonton has four men (Milan Lucic, Andrej Sekera, Cam Talbot and Kris Russell) with varying degrees of no-trade clauses. All spring (and probably all summer) we have to tack on a line to any trade idea that says “and maybe one of the NTC’s will agree to a move” because it’s out there.

There’s a lot of evidence piling up now. Edmonton spent $2.5 million on a backup goalie, the Darnell Nurse contract could go well into the $4 million+ range per season, we don’t know what the costs are on Ryan Strome. I posted two distinct rosters yesterday, one that brought everyone back and another that sent away several players. At this point, I wonder who is leaving.

Oscar Klefbom? Cam Talbot? Andrej Sekera? Milan Lucic? Kris Russell? I think that’s the list folks, from what I can see. Or they can buy out Sekera or Russell. I believe my math is correct here, Oilers have to send away at least one $4 million man in order to get things done. The absolute tightest screw they could manage would be Nurse bridge, Strome one year, trading Oscar for a similar cap hit and let the river run on right wing. That’s not Chiarelli’s style.

A busy Thursday on the show, all kinds of happenings. TSN1260, 10 this morning, scheduled to appear:

152 Responses to "Extra Texture (Read all about it)"