The Edmonton Oilers signed Tyler Vesel on Monday, he represents a successful “draft and follow” and I think some proof that analytics can find you useful talent. He was chosen in the sixth round (No. 153 overall) in the 2014 entry draft. Only two players—Kevin Lebanc and Ondrej Kase—have played over 100 NHL games among those drafted after Vesel. He is the third Oilers pick (Leon Draisaitl, William Lagesson) to sign an NHL deal, and probably (Zach Nagelvoort, Liam Coughlin, Keven Bouchard) the last. Was this an astute signing?

Earned the deal with his play in Bakersfield. Had five points over the final six games of the season. Smart player. https://t.co/qO7FyCQxYl

I did not have Tyler Vesel among my Top 20 Prospects during the winter but he has talent (as shown in the NHLE for forwards). For me, everyone from Benson up has a chance to play in the NHL (mostly in a secondary offensive role) and Vesey is in that group. He’ll help a solid group that may include Kailer Yamamoto, Cooper Marody, Cameron Hebig and Tyler Benson. 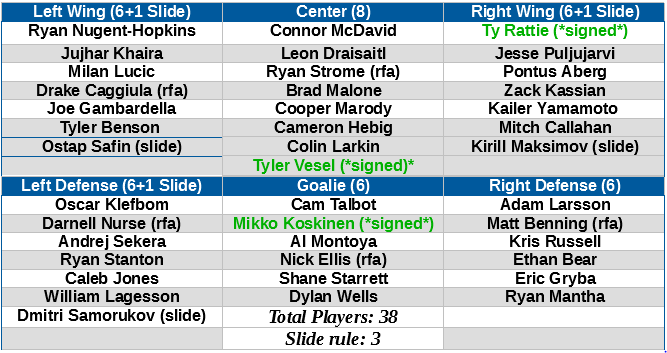 The team will have 20 forwards (above) playing pro hockey in Edmonton, Bakersfield and Wichita. The roster as you see it doesn’t represent lines, or a depth chart, but I will say the NHL players are at the top of each position. Here’s my shot at the opening night lineup for Edmonton and Bakersfield (with the understanding there are moves ahead):

Vesel’s career is similar offensively to Nic Dowd, who is a bigger player and a depth checker in the NHL. I think that’s probably Vesel’s future (if he has one) even considering those early AHL games mentioned above. I’m going to write an item this weekend for The Athletic on draft and follow types, I think analytics may have contributed to this selection.

Vesel is the third signing from the draft, Leon Draisaitl was the first-round selection followed by William Lagesson in the fourth round. To give you an idea about just how much harm trading away picks in 2014 and 2015 has caused the depth chart, here’s how the draft looks with no traded selections.

That’s a pretty good draft list, except the heart of the order was ripped away because the organization wanted immediate help. We’ve talked about this before but 2015 was even more devastating.

In early April I wrote about an ideal summer for the Oilers at The Athletic.

The No. 2 right-winger is a bigger need than replacing Kris Russell as No. 2 RD. That’s a fact. I’m watching Aaron Ekblad hammer Connor McDavid shots into twine at the World Hockey Championships so get the idea of a hammer from the point. It’s a very small pool of talent that qualifies for that role and Ethan Bear might fill it a year from now. How much are you willing to spend on Ryan Pulock?

THE LOWDOWN WITH LOWETIDE

A full boat this morning, big brains and big fan starting at 10, TSN1260. Scheduled to appear:

I Dreamed You Paid Your Dues in Canada

It Makes No Difference

113 Responses to "Caught a train from Alexandria"