One year from today, we’ll either be talking about a successful 2018-19 season or a new regime at the top for the Edmonton Oilers. There is no neutral ground. Peter Chiarelli has been consistent in stating his vision for the team and then doing the due diligence of finding solutions to the outstanding issues he sees as vital to success. We are now entering his fourth summer of fixing and for PC the phrase ‘sooner or later you develop a past’ needs a crisis management team of its own. How did we get here?

That was my list and Chiarelli did a helluva job getting Talbot and Sekera. The Korpikoski bet included an extra year added to the Boyd Gordon contract and that was a misstep. The big trade of summer was a searing loss (Griffin Reinhart for two high picks) and robbed Edmonton of an historic draft haul. Over at The Athletic, we talked yesterday about where to lay blame for the Reinhart deal (some feeling Bob Green was the culprit). My line of thinking has always been that the general manager is the decision maker, so we give him credit for Talbot, Sekera and Reinhart.

Chiarelli pulled the trigger on a painful trade June 29, 2016 and covered off the first item in doing it. A lot of people have been spending these last few months talking about the devastation of the Reinhart trade, but for me the Hall trade remains the deal that altered the trajectory of this franchise. Until Chiarelli, or his replacement, can find another player to push the river, this will be the turning point in the story I write.

Russell’s hiring came very late and arrived partly because Reinhart was unable to grab an NHL job. Puljujarvi isn’t a RHC but does set up a righty inside the top 6F for years to come. The backup goalie choice is akin to the Korpikoski item one year previous: It was a clunker. The signing of Matt Benning was  a win.

The team was coming off a very successful regular season and a legit playoff run, leading to a leisurely pace through summer. The big ticket items were getting 97 and 29 signed and it took forever (reportedly involving the threat of an offer sheet, although that might be issue framing).

By the time Peter Chiarelli got around to shoring up the roster, there wasn’t much still available (although Thomas Vanek would not be signed for several days after the Leon agreement). So, he traded Eberle to make sure he could afford Leon, but didn’t need to do it and then didn’t spend the extra money to help the roster. Either Daryl Katz has financial trouble, PC believed in all of his auditioning wingers, or Vanek wasn’t a fit. None of the possible answers is encouraging.

All the bets went sideways. All of them. Even the ones from previous seasons (Reinhart deal, Hall) conspired against Chiarelli. He arrived at spring 2018 under an enormous amount of pressure. 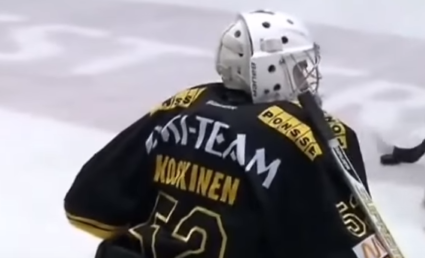 Hopefully we will see Skinner signed soon, at this point Bakersfield is his likely destination in the fall. The Condors goalie situation currently is whack!

Quinn Hughes is the man for the Habs at # 3. Future Norris trophy candidate who would electrify the Bell Centre night after night. @GMolsonCHC

This draft has a crazy feel, there seems to be some fluidity after the top two names (Dahlin, Svechnikov). I trust Simon, don’t trust the Habs. I wonder if a player like Wahlstrom falls, if the Oilers find a way to move up. Remember, they need someone who can make a difference offensively. Wahlstrom has that resume.

Interesting conversation on the blog yesterday, lots of different opinions on Laurent Brossoit, Al Montoya and how the backup goalie situation was handled. For me, the trade should have happened sooner (we knew Cam Talbot wasn’t at previous levels early in the year) and should have been for a more substantial goalie.

That said, it was Laurent Brossoit’s time to shine. I can’t fault a general manager for pushing an NHL audition for a player who has done everything asked and posted a solid resume. Brossoit’s performance (especially in that Saturday night game against Calgary, might have sealed his fate that night) made it an urgent piece of business and PC acquired Al Montoya.

If Montoya had performed well, we would be talking about an astute mid-season bet and a goalie situation that looked set (and solid value at just over $5 million for the set). Montoya was disappointing, and Chiarelli made the decision to get Koskinen. I have no quarrel with any of the decisions (Brossoit audition, Montoya replacement and possibly solving 18-19 in net, signing Koskinen) when taken in context.

Draft Kotkaniemi, grab a RHD in the second round and then look for skill until the end of the draft. Grab a late overager or two. There’s some free-agent money, spend it on two-way forwards and a RHD like Chris Wideman. It’ll never happen.

"He made everybody better. He made the game better."@byterryjones on the passing of Hockey Hall-of-Famer Clare Drake:https://t.co/KdtDOdyltn

A busy morning, lots to get to after a stunning weekend of playoff hockey. Scheduled to appear, 10am TSN1260:

DOWN TO THE WATERLINE

153 Responses to "Shine your light on me"