Blowin’ in the Wind

The last time the Edmonton Oilers hit home runs in both the first and second rounds of an NHL draft, it was 1993—even that’s cheating because David Vyborny waited for another round of expansion to find his way. However, Jason Arnott, Vyborny and 1993 have to be included, because the Oilers have never (aside from 1993) had a first and a second round pick play in more than 500 NHL games. Perhaps we’ll see a change in the weather this time. (Photo by Rob Ferguson).

Two weeks from today, June 1, I’ll have my final 2018 list to share with you. I’m about 30 into the project (rankings and notes will be new on every player), very little change in the top group but a couple of tweaks you may enjoy. The top 10 remains the top 10, in a slightly different order (some late breaking news and scouting reports). After that, it’s a little more fluid but for the most part the names will remain the same. Although I can’t produce the list today, here’s a quick mock that might reflect the draft for Edmonton.

SCOUTS AND THE DRAFT

Really interesting anecdotes from the Eagles presser, saying they never want to have just five picks ever again.

One reason: how much work the scouts put in. Each magnet is hours and hours of work. Hundreds of miles. And waiting three rounds for one player is difficult.

I’ve always wondered how much trading picks impacts a scouting department. Peter Chiarelli had to trade two of those picks (to Boston and San Jose for Chiarelli and McLellan) and I have a hard time getting upset about fourth-round picks. The first and second in 2015 were devastating and of course more picks were traded away that weekend for Cam Talbot and Eric Gryba.

If the Oilers are truly concerned with building up the system and having a strong graduating (to pro) class two years from now, Peter Chiarelli will keep his powder dry and Edmonton will make the picks in Rounds One and Two.

Not a lot to show for 10 years worth of second rounds. The 2010 draft boasted three picks from this round, Martin Marincin (177) and Tyler Pitlick (138) both hanging in. Anton Lander (215) is the only player in the group with over 200 NHL games. 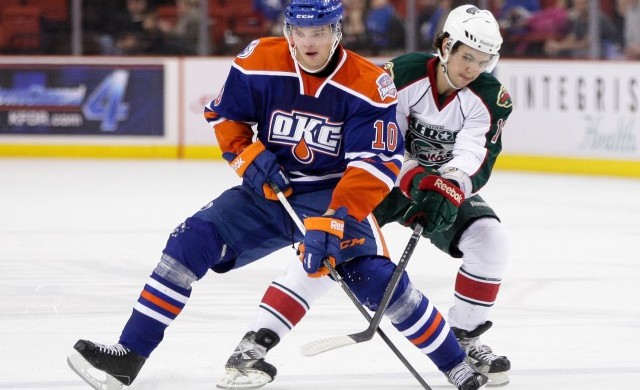 Back in 2008, my draft evening post was called ‘Draft Summary’ but I did have a take on each of the selections. Since most of that era’s posts are no longer publicly available, I thought it might be a good idea to post those initial takes for previous drafts. Here is 2008.

Edmonton has signed young Joel Persson to a one-year contract but he’ll play in Vaxjo (SHL) for one more season. It’s an unusual thing to do but not unheard of, Edmonton did the same thing with William Lagesson. Possible reasons: Organization may feel he needs to build on success and have more experience at SHL level before coming over; player may have balked at idea of playing season in the AHL and both sides agreed more development time in Sweden would benefit more than Bakersfield; Oilers may not have room on the Condors to assure max. playing time. Thoughts?

OILERS AT NO. 164: MICHAEL KESSELRING

Back to the future