The Yankees in those years were getting old in a hurry at every position, but could not abide Otis and his damnable bat. So, he was down the line and a member of the Cleveland Indians by 1984. The Indians tried everything they knew (“chop down on the ball, Otis!”) but he drove a second organization mad with his inability to do much more than walk and beat out infield singles.

In 1988, Nixon arrived in Montreal. Buck Rodgers, the manager, had a look at Nixon (a fabulous CF, he could steal bases at a 75+ percent rate, work the pitcher for a walk and any time he hit a groundball there was a great chance of an infield single) and set aside the lack of power and the endless pop-outs. Rodgers said “we’re not going to worry about what you can’t do, we’re going to have you punch run, bunt for singles, get those walks, steal second, third and home, and run down those doubles into the gap until the end of time” and Otis went ahead and did just those things.

Buck Rodgers never got a chance to manage Linus Omark, but I bet you a 2-4 he would have found a way to make use of what Omark could do well. This is the challenge of the Edmonton Oilers.

I look at these names and wonder what could have been if the Oilers had a single general manager and coach during these times. Tom Renney unlocked Magnus Paajarvi in 2010, but lost him the following year, thus beginning the journeyman portion of the player’s career. Anton Lander? Todd Nelson used him in all situations and the young center flourished in that very small window.

Linus Omark? Drafted during the Kevin Lowe regime, with Kevin Prendergast the scouting director and Craig MacTavish the coach. All three men were gone by the time Omark hit the Whitemud in 2010. Once a player becomes an orphan, that’s when the heartache begins. 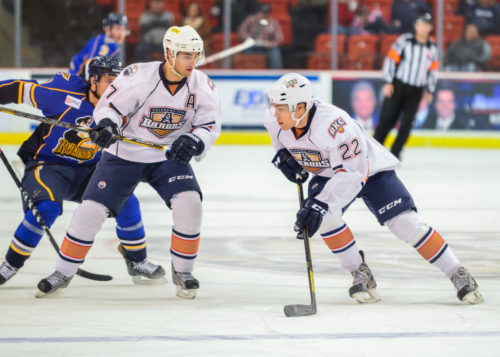 In 2010, on the Sunday night after the draft had been completed, I wrote the first Harvest Moon post. My summary said “A good, good draft. Hall clearly is going to be the story of this draft, but nice value in the second round (Pitlick, Marincin) and later (Davidson) tell us the Oilers set up their draft board well. These men (scouts) are going to be under pressure to deliver more than an average number of NHLers to the show for the next several seasons and it looks like they’ve delivered this season. Report card day is around 2015 summer. See you then.”

Excellent play by Noah Dobson on the OT winner. Will be a lot of eyes on him for the next week…..

I have him just outside the Top 10, meaning he would be available to the Oilers at No. 10. In truth, suspect Dobson is gone by the time Edmonton picks. If the choices are Dobson, Farabee and Boqvist, my bet will be on Dobson being chosen.

Top 3 players for Sweden as selected by the coaches: Adam Larsson, Oliver Ekman-Larsson and Mikael Backlund.

Larsson was stout in yesterday’s game, strong defensively and very physical. He’ll play in the late game today, there’s a chance for most Oilers at the WHC’s to medal today. Larsson is certain to win a medal, we’re just waiting on the color.

167 Responses to "The lessons of Nixon"