We are exactly one month from the NHL Entry Draft, followed by free agency 2018. A trade window opens after the Stanley Cup Final is completed (latest ending June 13) and it could be reefer madness all summer long. The Oilers will be active (Peter Chiarelli is aggressive, in case you didn’t know) but the truth is the roster players from last year will be the key to next season. Regression isn’t always a bad word, kids. 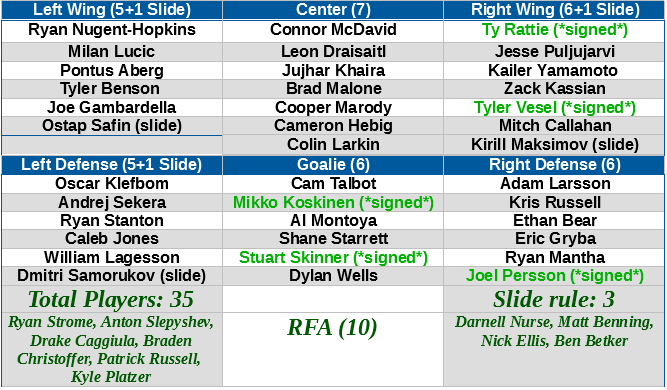 Matt Cane is one of the people out there who takes things we’re curious about and builds a model designed to answer those questions. This is the good stuff. I spent some time (lots of time) with this model yesterday and it fascinates me in most every case that could involve the Oilers.

I have a free-agent list ready and kept wondering about the best way to publish it. Thanks to Matt Cane, I can run it based on projected cap hit next season. Here goes.

The 2012 draft will be remembered for the poor return on the No. 1 overall selection, but the Oilers drafted players who had enough offense (with one exception). As you read these words from six years ago, have a look at the equivalencies. Nail Yakupov didn’t impact the NHL, but math adored him. You’ll notice the picks I was favoring over the No. 32 selection by Edmonton didn’t exactly tear up the blacktop.

Stuart Skinner @ssskipy_74 with simply one of the best goaltending performances I've ever seen with 54 saves and I have to think one of the best in @MCMemorialCup history… but it falls short as the @SCBroncos fall 2-1 to the @BulldogsOHL tonight. We're live on @TheEagle94one

I wrote about him the other day (link above) and it’s basically impossible to know if this is a turn north or a hot streak. That said, we’re 53 games (regular season, playoffs, Memorial Cup) since the deal and he’s been fire in Swift Current. The next question for Skinner, now that he is signed, is where do you play him next season? WHL, ECHL, AHL?

#Isles just released an official statement announcing Lou Lamoriello’s hiring, noting that he “will have full authority over all hockey matters with the organization.” There is no mention of Garth Snow.

Lou Lamoriello is the ultimate example of what happens when things are “grandfathered” and one guy stays too long at the fair. As was the case with Sam Pollock, I cannot argue the wisdom of the man, only that Lou’s trump cards should not be available to him. It makes the league look uneven, unfair. Example: The NHL had this silly whack-a-mole rule that awarded draft picks to an organization losing a coach or an executive. The rule was in place for about 10 minutes, but the Edmonton Oilers got tripped up twice by the blasted thing. If such a thing had happened to a Lou Lamoriello team, or a Sam Pollock team, I would bet my bottom dollar the rule would have been eased. Seriously. Remember the “Ilya Kovalchuk lose your draft pick” penalty? Yeah. The NHL rules are written in stone for some, invisible ink for others. Same as it ever was. Lou has apparently been talking to John Tavares while (as far as we know) still being employed by the Toronto Maple Leafs. If I’m the Leafs, not happy. Mark Hunter quit, what are the odds he’ll be in Brooklyn by September 1? Bah. And what pray tell comes of Garth Snow?

A busy, fun show with spectacular guests trying to make sense of long run on sentences that serve as questions! Such fun! 10 this morning, TSN1260, scheduled to appear: