Since 2010, 36 of the 65 Oilers draft picks attended the NHL combine (coming up this week). In fact, using only the first three picks of each draft, 22 of 24 picks ’10-’17 were at the combine (Leon Draisaitl was the only attendee in 2014). If you’re wondering about the Oilers in the first 100 selections at the 2018 draft, pay close attention to the combine list when it’s released this week.

There are several RFA who are going to be signed and we’ll see about free agency but there’s plenty of room if the cap will allow additions. I’d count on Darnell Nurse, Matt Benning, Ryan Strome and Drake Caggiula being added from the current crop of free agents. 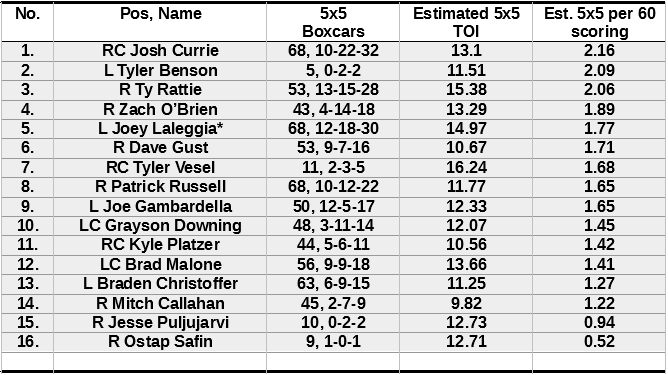 I haven’t really bothered with these numbers for forwards in 2017-18, there wasn’t much to trumpet. A nice late run by youngsters like Benson and Vesel offered some encouragement but it’s difficult to find the best prospect (forward) for the full season Condors. I’ll go with Joe Gambardella, but this was a very poor season for development among AHL forwards. All via prospect-stats.com.

The defense is where the action was in Bakersfield last season. I’d say Ethan Bear was the best prospect for the Condors, followed by Caleb Jones and Ryan Mantha (all ahead of Gambardella and the goalies). Peter Chiarelli has been working hard on adding forwards (and with good reason), I’m excited to see William Lagesson in the fall.

I’ve written a lot over at The Athletic about what the Oilers must do this summer (improve on the wings, shore up backup goaltending and find some good penalty killers) and the phoner with Peter Chiarelli and Todd McLellan the other day gave us an idea the general manager may be thinking the same way. Adding all of these coaches suggests, at least in part, that the general manager is doubling down on his ’94’s’ and we’ll see most of them (Darnell Nurse, Matt Benning, Drake Caggiula, Jujhar Khaira, Anton Slepyshev) back in the fall.

If this is a real “keep your powder dry” summer I’d be thrilled. If Peter Chiarelli can hold on to his draft picks, have his majors moves of summer be Mikko Koskinen, find a Brian Gibbons or a Mattias Janmark for the penalty kill, a scoring winger who won’t cost the moon and is under control from the Daniel Sprong/Alex DeBrincat tree, well that’s the best possible result this summer.