This Wheel’s on Fire

My all-time favorite ballplayer is Tim Raines, and that’s never going to change. I can’t tell you why, but maybe I can show you. Batting a buck-50 against Orosco when he hit it, what a beautiful ballplayer. Raines was perfect save for an average throwing arm, but he made up for it by always hitting the cutoff man. I bet he didn’t bleed 20 runs defensively as an Expo.

When he arrived, the Expos knew what they had, and Raines’ speed was so great the organization decided to move him from left field to second base. It was insane, but Montreal had a need and Raines was an all-world athlete. His agent ended the experiment in 1982, as I recall. He phoned the young man and said ‘you’re not playing second base anymore’ and that’s all she wrote. Sometimes professional organizations lose their heads, and for some reason it is often over gifted youngsters. You’d think they would know better. 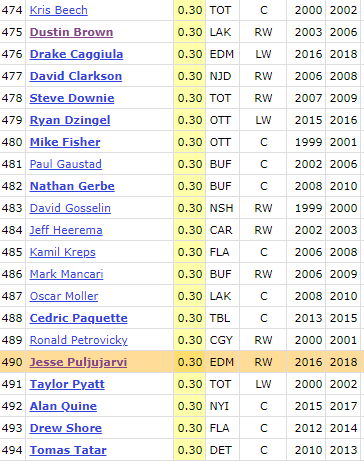 The list of comparables for JP runs from the good (Dustin Brown, Mike Fisher, Tomas Tatar, David Clarkson) to the rest. It is not a fabulous list but it’s also true we’re talking about a gifted teenager who has been used in all kinds of roles. Puljujarvi performs well with Connor McDavid but everyone does.

Leon Draisaitl is 2.22/60 with McDavid, Drake Caggiula is 2.05. Puljujarvi could evolve into 97’s right-winger but it isn’t the obvious 2018 training camp move. Puljujarvi with Draisaitl is a different matter.

The possession number is low but JP scored well with Leon last season. Puljujarvi didn’t score a bunch with Ryan Strome (1.26) as his center but did do well in possession (50.32). I expect he’ll spend the early portion of this coming season on the No. 3 line. I’d run him with McDavid. Seriously. He would be the third wheel offensively, but given time, suspect Puljujarvi settles in and becomes the line’s digger and a more natural NHL shooter. He’s in a race with Yamamoto, though. I think he has this coming season to find chem with 97. 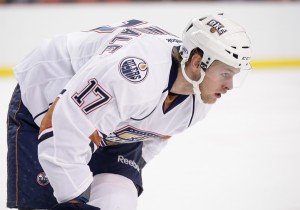 The 5×5 numbers are always more informative. The prospects beyond Rieder who are in the pipeline (Yamamoto, Benson, Maksimov) have a chance, Benson is in good position because of his range. Of course, Curtis Hamilton was the identical player seven years ago. Yamamoto is the only current prospect forward on this list I’d suggest as a sure thing and as always the player has to prove it. I’m bullish on Maksimov too, truth to tell.

I’ve spoken to a lot of people about the 2018 draft, ranging from public (Pronman, Boisvert, Wheeler, Kournianos) to private (various scouting sources). The general feeling I get is this is a tepid year for the CHL, with the dub being well off the normal pace. After about No. 12, the 31 lists may vary greatly, which means you could hear a scouting director or general manager say “we drafted three players we had in our top 20” something that happened in 2002. Edmonton whiffed on their first round pick but grabbed Jarrett Stoll and Matt Greene in the second round. The pick at No. 10 is going to be important but No. 40 might give the Oilers a chance to gain ground on the competition.

I’ll have my final list on Friday morning, plus a mock. I think we’ve come to grips with the fact that falling to No. 10, while inconvenient, doesn’t mean the Oilers can’t get a fine player in the first round. They must choose wisely, and I wonder if they’ll go safe (Bouchard) or high risk (Merkley)? Interesting month ahead.

For What It’s Worth