We’re inside the trade window now, teams positioning themselves for the draft and free agency by using assets great and small to acquire talent. Yesterday we discussed a Terry Jones article that put everyone on notice: Edmonton is about to do something in the procurement market. What would that look like?

Using Craig Button’s list I linked to yesterday, Edmonton’s top three selections would be Oliver Wahlstrom, Liam Foudy and John Gruden. That would be a massive draft.

I have included the NMC’s due to Milan Lucic’s presence on the TSN Trade List. This list isn’t pulled out of nowhere and there are some amazing names on it (more in a minute).

The TSN trade list is fascinating. Compiled by the insiders and focused on names in play, last year’s list identified 10 (33 percent) of a 30-man list who would eventually move on. Milan Lucic makes the list, Oscar Klefbom does not (but did make an appearance here). Again, the people behind the work aren’t just making things up. Here are the fascinating names that may be of interest to Edmonton this month (with years left on contract).

Plenty of options, lots of cap. I like Burakovsky a lot but can’t imagine the Capitals dealing him. If you can trade Lucic without retaining (more in a minute) then maybe it’s possible to snag one of these fine wingers (Hoffman would be my choice). As for defensemen, they all have appeal but price is an issue.

Gregor was in conversation with Ryan Rishaug at the time, and Rishaug said he thought the team would be better off just bringing Lucic back as opposed to dealing him for another difficult contract. I agree with him, depending on the actual player coming back. You get into problems, like Corey Perry at 33 with a $8.625M contract for three more years (all of the numbers via CapFriendly) or Bobby Ryan ($7.25M times four) because there are other contracts out there for more than $6 million times five more years.

It also gets into an area I’ve mentioned a few times, and that is Peter Chiarelli’s pursuit of the aged. When in Boston, he added men like Mark Recchi and Tomas Kaberle, who were long in the tooth and then some, and he had success in doing it. Which brings me to Dion Phaneuf, he of the $7 million contract times three. A team owning this contract might see Lucic as an attractive trade option, and Phaneuf’s 3.98 5×4/60 scoring number a year ago might have some appeal. 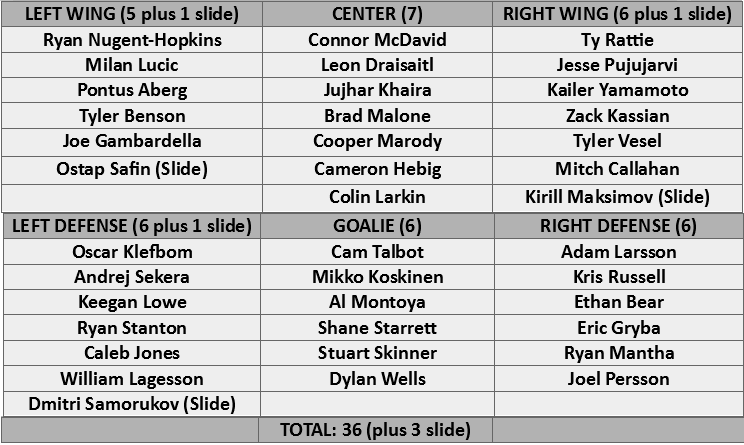 If the Oilers reach July 5 with Ty Smith, John Gruden, Thomas Vanek, Derek Ryan and Austin Czarnik, I’ll consider it a successful summer. The problem? Peter Chiarelli is an aggressive general manager who wants to add a power-play expert who plays defense. Torey Krug, making $5.25M for two more years, is likely going to cost you Oscar Klefbom. It continues a trend by PC of addressing specific need while also overpaying in the marketplace.

A fun, busy Thursday morning awaits us, beginning at 10 on TSN1260. A special thanks to everyone I met yesterday at the TSN1260 Golf Tournament, thanks for the kind words and hope you enjoyed the pie. Scheduled to appear: