Oilers fans have enjoyed a few interesting news items this spring (Cooper Marody, Mikko Koskinen, new coaching staff) but the next three weeks are going to be like watching a raging river run. Peter Chiarelli says he won’t tear it down, but he’s an incredibly aggressive executive. What does keep the powder dry mean to PC? Will he slow play summer? Or find a way to acquire a puck mover who makes over $5 million a year? His signature trades always happen in the back half of June, so we are close to the window opening.

This is the assumed lineup if rosters were frozen. We could put Kailer Yamamoto in a right-wing spot, or project Cooper Marody into the opening night lineup (it’s possible, and Tyler Benson may see NHL time before the end of the season as well). I’ve highlighted the ‘upgrade areas’ in yellow and will admit the Lucic item is new since our last discussion.

I’m a little giddy about these Lucic rumors, but we need to keep a British style stiff upper lip so as not to be disappointed when the trade turns out to be Lucic for a World War Two bomber parked out by Agassiz.

Incredibly, it appears he will be moving on this summer, as the Ottawa Senators celebrate ‘hold my beer 2018!’ in the capital. What would you offer? It would depend on a long-term deal being agreed to (sign and trade?) but if the Oilers are serious Leon Draisaitl, Ryan Nugent-Hopkins, No. 10 overall, Oscar Klefbom, Darnell Nurse, Jesse Puljujarvi and most other items would be on the table. Insanity we’re even talking about it. 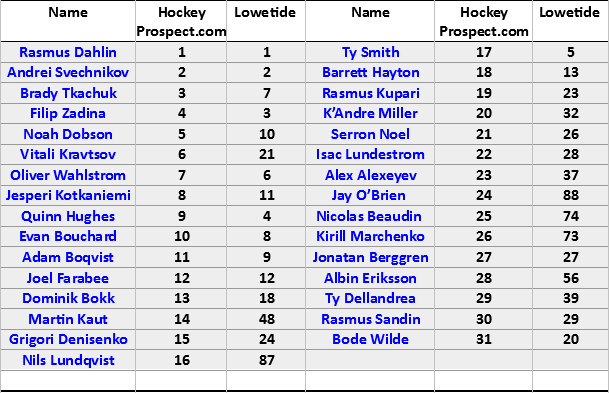 This is always a fun list and gives us a different view of the top 10 overall. If Evan Bouchard falls to No. 10, the Oilers will fly to the stage. Jay O’Brien is a fun name, and Kravtsov is emerging as a top 10 option late in the process. It’s one of the reasons I cut off June 1, because you get to see how much changes late in the process (combine, etc).

I can see the draft going just this way, in fact Edmonton may get even more opportunity depending on teams wanting to trade up. It’s a wild draft that gets going when Montreal makes their pick.

I will be doing an “AMA” with the folks at Reddit today at 4pm Edmonton time. The previous time they had me do it was a blast, looking forward to it this afternoon. Question: What does AMA stand for? Perhaps I should have asked before agreeing.

The Lucic item above (don’t get too excited!) gets a strong push with the words from Darren Dreger this morning on TSN1260. Speaking to Dan Tencer (filling in for Dustin Nielson), Dreger prefaced his quote by saying “I’m not suggesting that this could happen, I’m using this as a scenario, a possibility”:

Dreger did not talk about this as an active rumor, merely as an example (made certain it should be treated as such several times). That said, it frames my concern perfectly. Using “sweeten the deal” implies another half teaspoon of sugar in order to adjust for taste when in actuality you’re trading the entire Tabor Sugar Factory.

And you know what? That trade example fits right in with the ‘trades of June’ deals by Peter Chiarelli:

The Dreger trade example above was grabbed from the ether, from fantasy, from the clear blue sky, and yet Oilers fans have to acknowledge the thrust of the deal fits the rhythm of Chiarelli’s three June blockbusters. Peter Chiarelli said he wasn’t going to blow it up, but what does that mean, exactly? We wait.

The Need for Speed