Every morning sunrise to reach your eyes is another gamble won. If you feel like lost, you’ll end up found, so amigo, lay them raises down. Matt Cane’s free-agent AAV model had Drake Caggiula making $1.3M times two, the young winger landed at $1.5 per year for the next two seasons. Not a huge difference but the Oilers always pay full price plus a little. At the end of the day, with the roster final, there’s going to be a $4M player missing. Death by papercut indeed.

Cagggiula has been remarkably consistent but it’s unclear that he’s going to have a long career. There’s nothing here that suggests Caggiula is going to emerge as 2.00 points-per-60 player at 5-on-5 and honestly he’s an older player now (he turns 24 in a week) for a “young NHL player”. Via NaturalStatTrick, here are the 5-on-5 offensive numbers for Caggiula with difference centers this past season.

He is not strong in possession, the only center he flourished with is the guy who hammers the league every game. The Strome line is his most likely destination and that’s not a strong number. Caggiula got a good contract, good for him and I hope he scores 20. The real problem is the Oilers re-signed Caggiula instead of finding the next Andreas Johnsson, who has a much better chance to move the needle in the NHL. Everyone makes bets that don’t thrive. Very few general managers double down.

PROJECTED ROSTER AT THIS TIME (WITH CAP)

This includes Benoit Pouliot’s buyout number and I am using Matt Cane’s numbers here. The signing of Caggiula is about $200,000 more than the estimate, Edmonton is going to have to make a trade in order to add anyone significant during the offseason. I would bridge Nurse. I placed Yamamoto here, maybe the team waits until July 10 and signs the best available lagging veteran or pursues the next Ty Rattie. My bet? We’re about to see at least one trade, probably two.

Pierre Lebrun sheds more light on the Milan Lucic situation here, it looks like this will be a hockey trade or no trade at all. Applause. Adding a sweetener to a Lucic deal is noxious in the highest.

Fascinating Bobcast this week, a lot on the draft. If anything, the top 10 is more fluid now than it was before the combine, possibly good news for the Oilers. Jesperi Kotkaniemi and Barrett Hayton are apparently moving up with Filip Zadina and others falling. Music! Heather Marginet posted some interesting thoughts from the podcast, looks like the first nine names off the board are anyone’s guess.

I mention this every so often and always get the same feedback. Tyler Benson, as things stand currently, has an excellent chance of getting into NHL games this winter. Here’s the latest 50-man, with Benson’s current slot on the depth chart. 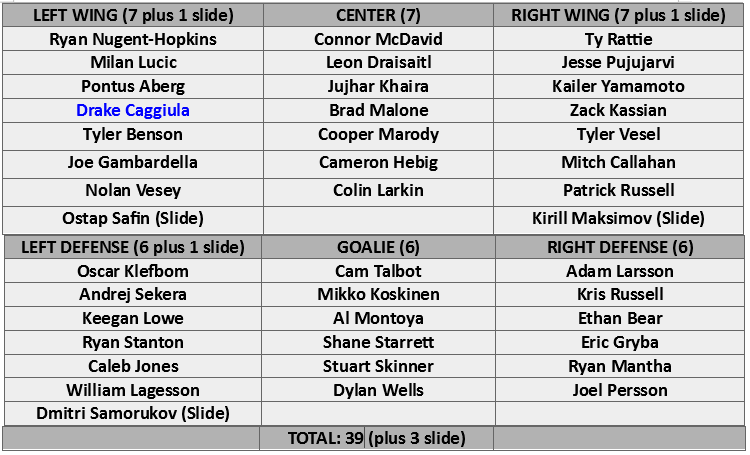 Benson is an injury or a slump away from recall, with only a few other options (Joe Gambardella, Cooper Marody, Patrick Russell) standing in the way. There will be more names added to this group, but Benson (and Kailer Yamamoto) don’t have a strong group to overcome. The pipeline needs strong candidates on the wings. Schnell.

Blowin’ in the Wind

(You and me) Sittin’ in the back of my memory