In the late summer of 2016, Travis Yost made an appearance on the Lowdown. After an especially awful food take, Yost said “the thing about this Oilers team is they have McDavid and that combined with goaltending might get you into the playoffs.” It happened just that way. Too simplistic of course, but if these Edmonton Oilers stay healthy and they can duplicate Talbot’s performance of two years ago, music will once again fill the streets of good old our town.

I changed over to HTTPS the other day and it seems to have knocked the universe a little to the left. If you’re reading this and can’t find the comments, please log in and all shall be revealed. You may have to sign in on all of your electronics that you use to get here. I didn’t anticipate this problem, but we are here. If you know someone that can’t see the new posts or comments please pass along they need to log in. Apologies for the inconvenience. I can fix 8-tracks, but this is a little beyond me.

Sounds like the Oilers and Talbot camp are going to hold off any negotiations on an extension until after the start of the season. Important year for him, and the team.

I’m not certain Talbot will be on the team next summer. If he has a strong season the next contract Talbot signs will be too rich for the Oilers. If he struggles, Edmonton moves on like a bullet leaves a gun (thanks, Tom Waits).

Beginning on March 1, through the end of the season, Talbot had a .920 save percentage. I believe it’s prudent for Peter Chiarelli to hold back on signing Talbot now, but also believe it likely means he’ll be in another city this time next year.

DT: EDM – Grade A-: The Oilers got 3 good ones & a long term project with the 4th. Bouchard is a lock to patrol that blueline for years while McLeod will push the pace when he gets there. Rodrique gave them the best goaltender in the draft & Kesselring might be worth waiting for.

Although Mark Seidel’s grade is higher than others, this is the kind of verbal Edmonton’s scouts are seeing in the week after the draft. As I read more on Kesselring, the more intriguing he gets. You don’t have to be famous on draft day, just 10 years after. I count the 2017 and 2018 drafts as good arrows and the 2016 edition is trending well save for portions of the third round. The pipeline is more substantial. 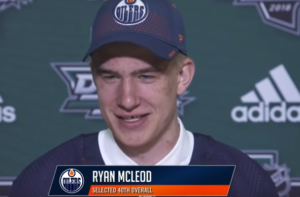 One of the areas we should look at for possible value contracts in the free-agent market is Boston’s procurement list during the Chiarelli years. He would have knowledge of them, and vice versa, perhaps there is a fit. Here are a few names.

A fun morning, beautiful day ahead and plenty of things to discuss. A splendid group of guests, starting at 10 on TSN1260. Scheduled to appear: