Everyone has their favourite subjects, one of mine is acquiring players via waivers. Edmonton claimed Brandon Davidson and Nathan Walker last season and I’m going to bet there will be some impressive offensive forwards sliding through waivers in the fall. Will Edmonton grab one?

I do this every year, list all the wonderful skill forwards and defensemen who are available. The Oilers claims have gone to Ryan Jones, Steve MacIntyre and others, but I remain convinced one sweet day they’ll strike it rich like Leduc No. 1. Last year it was Brandon Davidson and Nathan Walker, this year my vote goes to.

Had a couple of conversations yesterday about right wing. Ty Rattie is among a group of players vying for time on the skill lines in 2018-19, and I suspect he’ll get the lion’s share of the early McDavid RW minutes. Rattie is a little unusual for a skill NHL winger, he is 25 and has played fewer than 50 NHL games. Since the turn of the century, there aren’t many players who are comparable to Rattie who went on to significant NHL success:

I hope you recall my Farm Workers post I write every spring and you may recall the passage about men who are similar to Ty Rattie. It discusses their chances of making the NHL as skilled men after significant minor-league time.

Mike Walton was not similar to Rob Schremp or Ty Rattie but did in fact play a lot on the minors (172 games) before beginning his NHL career (588 games). He was an NHL regular on his way to 30 goals at age 22. Rattie is 25, has played 49 NHL games and 268 AHL games at this point in his career, so expecting 201 NHL goals (Walton’s total) is a stretch. That said, Rattie has a shot, we’ll see if he can keep the job (his work with Nuge and McDavid 5-on-5 was impressive in goal differential, but a sawoff in possession).

At some point Evan Bouchard will likely get signed in the AAV range (with bonuses) similar to the ELC's for Mikko Rantanen and Tyson Jost.
With RFA Darnell Nurse, an AHL Center and Bouchard Oilers will be at 47 contracts.
No guarantee the teams signs a 14th forward at this time

Bob’s math is correct here (see below) but I’m not certain it is a wise path for Edmonton. As I wrote in my article for The Athletic yesterday, there are still players out there who can help. Perhaps the plan is to invite some at the lower end (Jason Chimera, Joe Colborne) to camp. 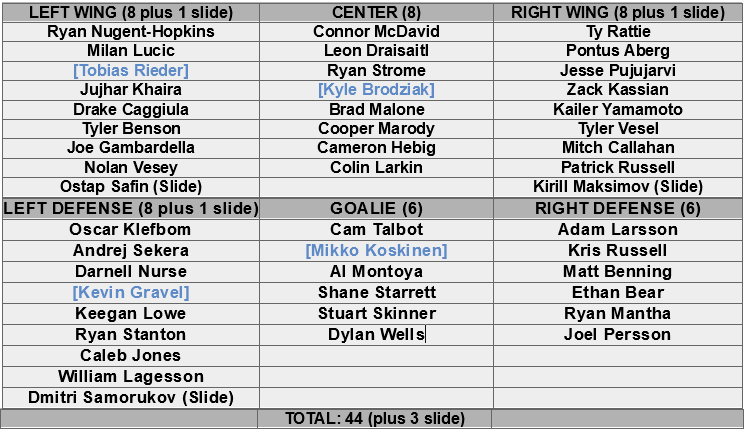 If this is the roster (with additions mentioned above) I think we can safely guess Edmonton’s opening night lineup:

Rattie gets the first lash at No. 1 right wing, Kailer Yamamoto walks the streets of Bakersfield. For me personally, I would not invest another season in Milan Lucic as the No. 2 left wing, but Todd McLellan is going to push the veterans so Leon’s likely wingers out of the box are Lucic and Rieder. I like that third line and they did some good business in a very small sample one year ago:

At 10 this morning, we have a full boat, doesn’t matter what happens on the river. TSN1260, scheduled to appear:

Show Me The Way To Go Home

Ashes by Now
Blood On The Tracks

A Trip to Forestall