The Edmonton Oilers signed Evan Bouchard on Tuesday, he is potentially the most substantial offensive defenseman drafted by the organization since Paul Coffey. Bouchard is not similar in style to Coffey, but if you enjoy the outlet pass to daylight and a defenseman who can get his shot through to the net, Bouchard will have appeal.

I like Button’s scouting reports, he gives you a real idea about the player and ability. We’re not discussing another Paul Coffey here, but rather an expert in the headman pass who possesses a big shot and offensive creativity. His skating has been the subject of much discussion, Brock Otten’s nuanced scouting report gives us the lowdown.

One of the main discussion points for fans after the signing surrounded Bouchard’s chances of making the Oilers roster this fall. I’d say the chances are very strong when considering the Oilers own history in fast tracking, Bouchard’s age (turns 19 in October) and physical maturity. The pressure point will come after nine NHL games.

This is not a roster built to go deep into the playoffs, but Connor McDavid’s presence means the playoffs are never out of the conversation. One difference between this year’s team and last? I doubt Peter Chiarelli waits on the goaltending as he did in 2017-18.

I have Al Montoya and Evan Bouchard listed as roster possibilities, you could also include Kailer Yamamoto, Keegan Lowe, Ryan Stanton, Ethan Bear. Maybe a couple of others and suspect we’ll see an invite or two from the Jason Chimera wing of free agency.

Ryan Mantha’s eye issues may mean we’ll see an addition on the blue line, that may not come until closer to the beginning of the season. One hopes Mantha recovers completely, he had a promising rookie campaign in the AHL.

I’m also uncertain about what direction the goaltending will go. Stuart Skinner is probably the best in the group, but the Oilers don’t place their 20-year old goalie prospects in the starting role in the AHL. We might see Skinner in the ECHL, or even junior, this fall. 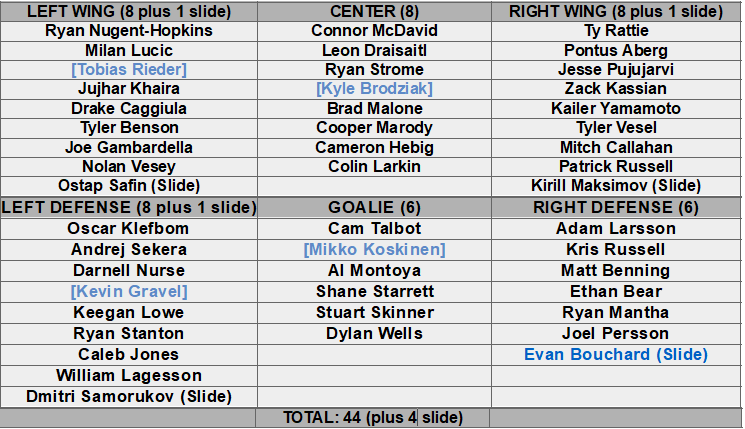