Josh Currie signed a two-year NHL contract yesterday, it’s easily one of my favourite stories of summer. Edmonton will rely on him to play at his established level for the Condors, and Currie pushes a growing career forward in a significant way. Will he play in the NHL? Mark Arcobello was in just this spot in about 2012 and he played 139 NHL games. Currie is pushing, and fans are cheering him. Great story. 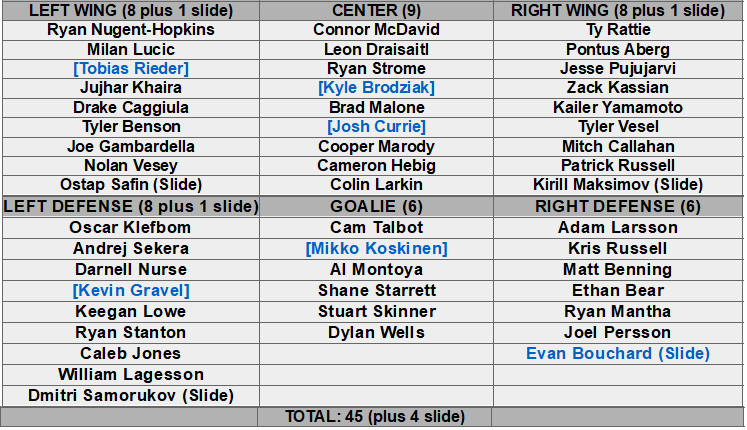 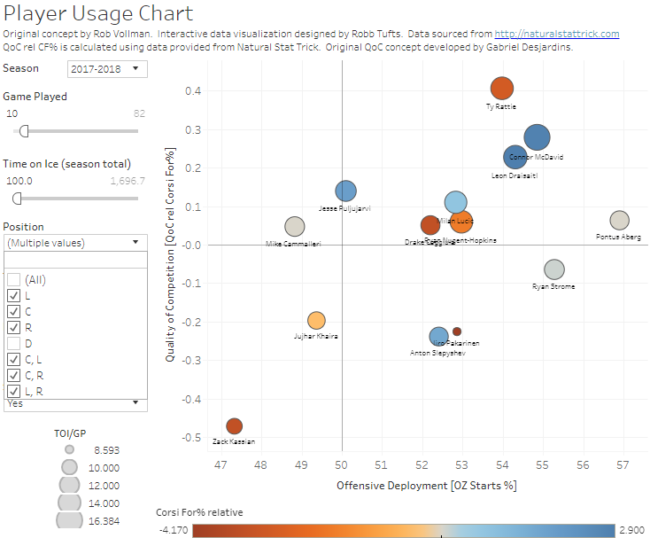 Connor McDavid and Leon Draisaitl faced tough opposition through the season (Rattie joined 97 and Nuge late, and as you can see the possession results had some wobble), with a large group of forwards placing a combination of second and third line opposition (most Oilers forwards in blue or heading that way). Zack Kassian faced the tough zone starts and the easier opposition, Jujhar Khaira between third and fourth line. Jesse Puljujarvi didn’t get a zone-start push, interesting.

The only downbeat colors are Kassian (drastic zone start), Iiro Pakarinen (fringe NHLer) and Drake Caggiula (he was a drag on his linemates). Ryan Strome was in a very sweet spot, you’d like to see more offense from the soft parade. 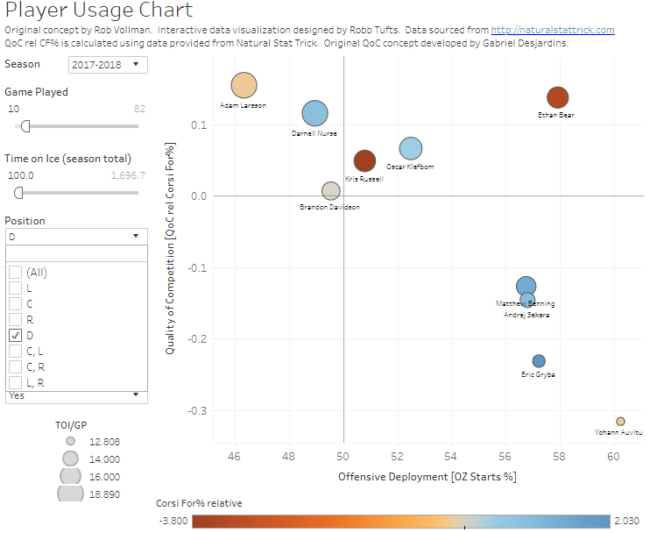 Vollman has Adam Larsson in the toughest quadrant available, with Darnell Nurse not far away (and Oscar Klefbom an hour’s drive). This graph really shows how far Andrej Sekera fell in terms of usage. That’s a continent. Kris Russell’s bubble color is the same as Caggiula’s, I’d like to see Matt Benning trade places with the veteran this coming season.

the @copperandblue is pleased to announce the acquisition of @coopsie39. in his excellent debut piece, he's going to fix up the #oilers top six https://t.co/oE2oLjMPXb

I’m not a bragging type, or at least try not to be. I am proud of the fine group of people who have visited this site, developed opinions and refined defense of same, and then moved on to write about the things that are important to all of us. From the base reaction of “someone is wrong on the internet!” to some brilliant analytics work and lovely prose, I can review this blog’s back pages and see many fabulous beginnings. I take pride in that, not in the work because that’s from the authors, but in creating an environment (not the only one, but one that welcomes weary travelers) that helps the river run out to the sea. Congratulations to Original Pouzar!

The Streets of Bakersfield