In the 1960’s, I was too young to know what was cool and what was uncool. It led to many decisions based on personal taste as opposed to peer pressure. For instance, I liked the Monkees far more than the Beatles (my brother sent thousands of fists my way over that one), the VW Beetle more than the sports cars of the day, and collecting baseball and hockey cards.

My lifetime of nerdiness established and known to all but me, I made choices that, upon reflection, look decidedly unimpressive. For example, I love, love, loved the song “Kicks” by a band called Paul Revere and the Raiders. I liked more of their songs, not just that one. Paul Revere and the Raiders would appear on television wearing the damndest things, and I liked them anyway. Wherever cool was, they lived in the next town over. Didn’t matter.

Sometimes in life, things are just good and you have to admit it no matter the consequences. Preferring the Monkees to the Beatles cost me some lumps, and singing “Kicks just keep getting harder to find” while walking around our house wasn’t a friend getter, but you are what you are. If you see or hear quality, acknowledge it and own it. Those things are what make you unique.

I’ve been running a top 20 prospects list every summer for absolutely ages. The first time I published a list was summer 2003, via hfboards. It’s in the archives of this blog now, I want to repurpose it here in order to point out just how much we don’t know when ranking these young men. 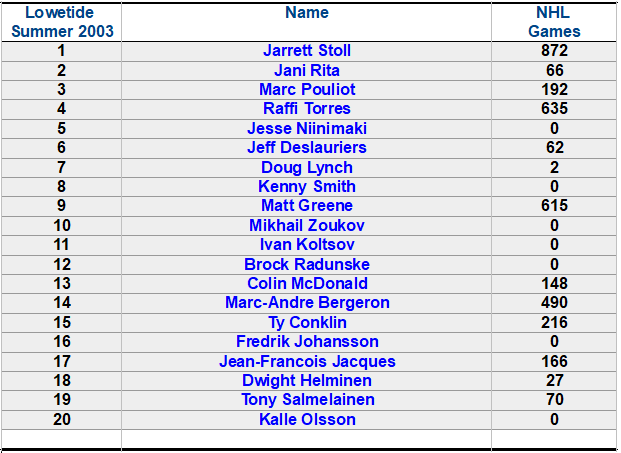 This blog started with a few ideas, chief among them to take bias out of the conversation (as much as possible) to allow for a neutral starting point for posters. I wanted you to arrive here, read the prose, be entertained and informed, and then we could begin a conversation about the subject at hand. It’s impossible to spend 15 summers ranking a top 20 list without letting bias get in the way and I was absolutely guilty time and again.

My move to The Athletic allows me all kinds of new experiences and the top prospects list was a major one for me. I’ve watched other sites reach consensus and for me that’s a great way to iron out the bias. I was also curious to know if my rankings would be out of time with others (and vice versa) when Jonathan Willis set about compiling four lists (his, mine, Scott Wheeler’s and Corey Pronman’s) into one ranking for the summer 2018 top 20.

Jon published the list of defencemen and goalies ranked outside the top 20 (here) and my list of forwards who didn’t make the cut were just published and are here.

I wondered how my rankings would differ from the group. I wondered specifically about Joe Gambardella, who in my opinion has enough going on that we might be dealing with a small “p” Pisani if things break right. I wondered if the three other gentlemen voting would give “Kicks” Gambardella a proper hearing, and also wondered if I let bias get in the way when the player’s numbers didn’t warrant a bold number (despite my belief in him as a prospect).

As it turned out, I ranked Gambardella one spot higher than consensus. I’m thrilled by that outcome, because a player that impressed me a lot but didn’t have the numbers got a fair shake in the overall rankings. I’m satisfied with the entire list, truth to tell.

You will see the results as the days roll by, but I’m happy to say differences in the group were minimal and exactly one player in my top 20 missed the cut (he is ranked No. 22 on the final list, I had him No. 18). It tells me two things: I may have improved since 2003, and when you rank prospects at a specific time it is exactly that process. What happens afterward, after the photo, cannot be predicted. I couldn’t know the Oilers head coach simply didn’t see Jani Rita as an NHL player and that Rita would never get 500 at-bats to show what he could do, but that’s not the purpose of the list.

If you haven’t yet subscribed, it’s less than $4 a month right now. I’m proud of The Athletic top 20 this summer, thrilled to work with Jon, Corey and Scott. Hope you enjoy reading today and in the days to come.

Yesterday, Darcy McLeod dropped by with Puck IQ wowy’s for Darnell Nurse and Adam Larsson against elites. As if Nurse didn’t need more ammo for his contract negotiations, the numbers are impressive. This is versus elite, DFF percentage.

We know the power of the McDavid zoom, but that’s some good defense right there for the young Nurse. Two years, $3.5 per? Does that bring out the Chiarelli searchlight police copter? I think the second pairing should be Nurse-Benning, the third pair Sekera-Russell and if Evan Bouchard makes the team Russell is the one to sit sans injury. Agree?

At 10 this morning,  TSN1260, we rock and roll with some cool older people. Scheduled to appear: 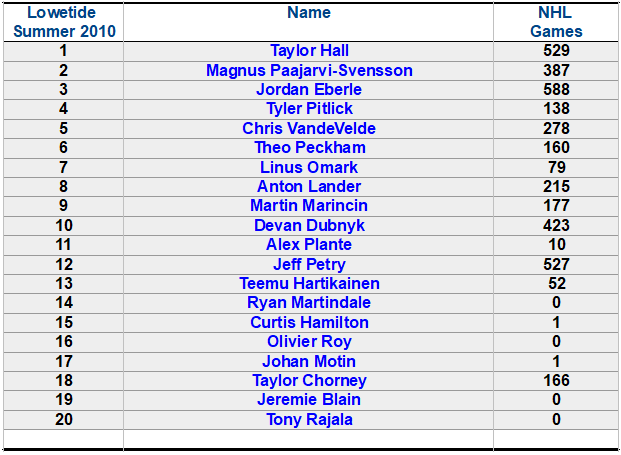