The Edmonton Oilers 2016-17 will long be remembered as the group that pulled the franchise out of the depths and allowed the fanbase to dream of Stanley again. The breathtaking Connor McDavid and emerging Leon Draisaitl provided ample torque for the team, while Cam Talbot was outstanding all year long for Edmonton. This past season, all that progress seemed to wash away in one devastating deluge. Today, we are here, after the rain.

One year ago, the McDavid cluster counted four men (97, 29, 25 and I’m trying to shoe-horn Puljujarvi in, maybe he grabs the future this season), there are three more names added and we’ll see if they have sustain. It would be so very good if all three of the new hires blossomed and played lots of NHL games this season, there are no wild and crazy bonuses owed to any of the newcomers to my McDavid cluster list.

One thing I am keeping track of? Players who were in the McDavid cluster who failed to stick around. That list includes Nail Yakupov, Griffin Reinhart, Anton Slepyshev. Players who were part of the 97 cluster early and graduated to the veteran cluster include Jujhar Khaira and Drake Caggiula.

The McDavid cluster, above, is the heart of the Edmonton Oilers.

On a traditional team, this would be the heart of the order. With McDavid still in the youth department, this section lacks the star power but there is substantial talent here. RNH, Oscar Klefbom and Adam Larsson are important pieces. I believe Matt Benning may get there, and other candidates include Ryan Strome, Jujhar Khaira, Tobias Rieder and the others listed here. 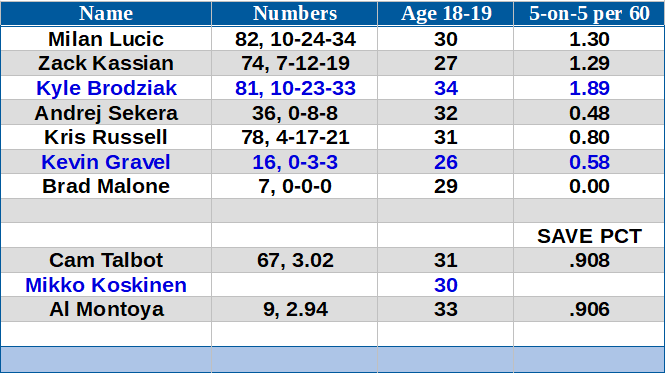 There’s a lot of turnover in this category, recent exits include Matt Hendricks, Jordan Eberle, Benoit Pouliot, Patrick Maroon, Jussi Jokinen, Mark Letestu. Teddy Purcell was once on this list.

THE MCDAVID CLUSTER BY YEAR

In all three seasons of 97’s career, youth has been served. The most explosive group is the young set, with 2016-17 shining like a diamond (those 236 games were posted by McDavid, Draisaitl, Nurse and Puljujarvi). Share of games increased in 2017-18 but the group wasn’t as productive. There are some promising names bubbling up, Yamamoto could be a key contributor as soon as this season.

THE PRIME CLUSTER BY YEAR

On a perfectly balanced team, this group would be the most productive. Part of the issue is McDavid-Draisaitl driving the department of youth, but it’s also true that trading Hall and Eberle made this cluster less productive. Nuge, Klefbom and Larsson are nice pieces, but there’s no one to push the river in this group.

THE VETERAN CLUSTER BY YEAR

Hall and Eberle never reached this sector but the Oilers have had some productive players from this group over the three seasons (Andrej Sekera, Teddy Purcell, Benoit Pouliot, Patrick Maroon, even Mike Cammalleri brought some good things).

A full boat this morning, starting at 10, TSN1260. Scheduled to appear: