In May of 2015, in the weeks after Peter Chiarelli arrived in town as Edmonton’s general manager to replace the MacTavish team, I wrote the following:

I was correct about the Oilers improving in goal and on the blue, but I missed badly in method of payment. Now that most of the golden kids are gone, what next? What can the organization use to address need? Are the internal solutions, while unproven, sufficient?

There are several names on this list that work for me as additions to the current roster. Benoit Pouliot isn’t coming back, but I’d take him on my team. Jannik Hansen would be a solid addition as well and Nick Shore inexplicably remains available. I’m a Brandon Davidson fan, but there was a hitch in his giddyup in 2017-18.

WHAT DOES THAT MEAN FOR THIS YEAR?

The Oilers are curious about Evan Bouchard now, the final decision may come down to an invite like Bouma versus the teenage blue. Here’s my last posted projected roster, including eight defensemen.

Bouma’s hiring could also put Pontus Aberg’s roster spot in jeopardy, possibly forcing Jujhar Khaira or Drake Caggiula down the depth chart. A doomsday scenario might see Bouma getting a contract and Jesse Puljujarvi getting sent down Bakersfield. To the rosaries, ladies and men!

Where does the next tradeable asset come from? My guess is from the blue line and it could arrive soon. If Evan Bouchard makes the team, and plays well enough to stay, Edmonton might deal a defender before next summer. Candidates include Andrej Sekera, Kris Russell and Matt Benning. I would not trade Benning. In fact, I would play him second pair with Darnell Nurse. 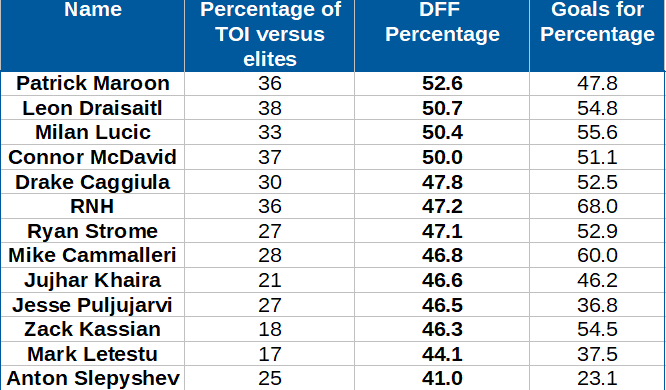 I was asked to publish this again, this is Puck IQ (my thanks again) and shows some fascinating things. Drake Caggiula played 30 percent of his 5-on-5 time against elites, that’s something the organization should take a minute over and think about what they’ve done. Slepyshev also had a tougher row to hoe than you’re think and JP as well, the Russian and Finn quite unlucky in goal differential against the toughs.

The top four here look obvious, with Andrej Sekera in the conversation if he’s 100 percent. I am beginning to get excited for the season.