We talk a lot about waiting five years after a draft, meaning we can conclude all business and make the call on a draft season. I did exactly that just the other day for 2013. If an NHL team could procure two regular players per draft, and those players filled a role as a regular for 10 seasons, the entire roster could be homegrown. This impossible dream is called Sam Pollock. How are the Oilers doing? You know the answer. How quickly can they recover? Good question.

I rely heavily on games played, but if a team drafts three players who play a substantial role on a regular basis, that’s a strong draft. Edmonton has done it, just not enough since the turn of the century. Also, generational talents and impact forwards to the front of the line.

The odd man out was 2003, Kyle Brodziak couldn’t save it from the seventh round. This ranking is a little different than my previous looks and honestly we haven’t done this for two years. Input on ranking welcome.

Going through the process of ranking and then writing about the top Oilers prospects at The Athletic reminds me about how unpredictable recalls to the NHL can be over the summer. Jon wrote about Ryan Mantha yesterday, he’s a guy who made terrific progress and then a freak eye injury changed his world. I haven’t mentioned Mantha as a recall option because we simply don’t know if he’s going to play, or at what level.

I predicted Ethan Bear would play one NHL game during my RE series last summer:

As it turned out, he passed both Eric Gryba and Mark Fayne on the depth chart and enters camp no worse than No. 9 on the depth chart (the starting six, plus Kevin Gravel and the emerging Evan Bouchard). That means he’ll play in the NHL this coming season barring a setback in performance or personal injury. Caleb Jones may push forward this fall and get some NHL games, but losing Mantha (if that is the result of the injury) impacts the organization’s talent flow in a significant way. 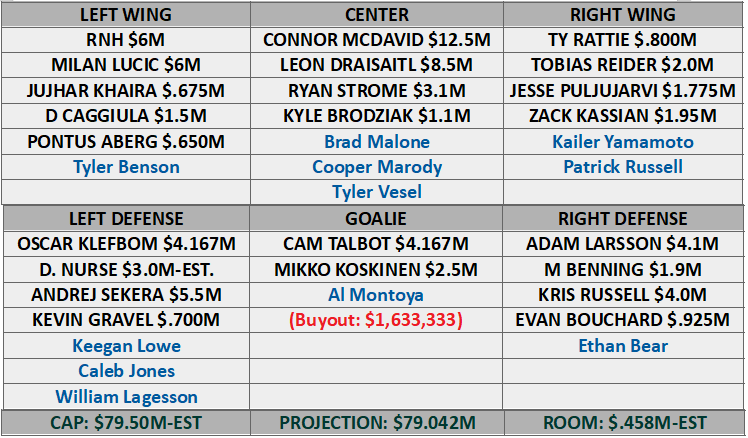 I’ve mentioned Tyler Benson as a more prominent factor than one would think due to positional shortage. That fact likely gets him a longer stay in camp if he can perform well enough in preseason play. It also points to the strong possibility we see Lance Bouma (Bob has been mentioning him) or Jason Chimera in training camp.

At center, Brad Malone still has the inside track (OP needs to light more candles!) with Cooper Marody and Tyler Vesel likely to get AHL time in October. I can see Marody being an early recall if he is posting crooked numbers in California.

Kailer Yamamoto has the best chance among forwards in blue to make the team. They liked him last fall, suspect the chem will work with skill centers again this coming October.

On defense, I think Evan Bouchard will be the main story. If he makes it, Ethan Bear gets pushed down the depth chart. If Bouchard is sent back to junior, Bear would probably be an early recall option. On the left side, Keegan Lowe trumps Ryan Stanton (not listed) while Caleb Jones starts with the edge on William Lagesson, but that should be an interesting battle for recall. Al Montoya really is in no man’s land.

A fun show with an unusual theme, based on a tweet sent out yesterday afternoon. At 10 this morning, TSN1260, scheduled to appear:

WHAT TO DO WHEN YOU DON’T HAVE THE HORSES

Here Come the People in Grey