I promised you a trip to reasonable, we’ll have to do it in pieces over time. There are two issues with the skaters that are giving me pause: The amount of recovery for the power play that reaches reasonable top dead center, and how to handicap the skill RW jobs. None of this really matters, but if we’re going to make an effort then let’s give it a real try. I estimated 25 games for Ryan Strome with Connor McDavid a year ago, he played 160 minutes with 97 (about 300 minutes shy of “reasonable”) so it’s a moving target. This year, right wing remains a mystery.

This is all of the top six in my RE. Some of these players are also on my bottom six table but for me this is the best way to break things out. For instance, I have Tobias Rieder’s estimated GP total, but he’ll play more than 12 minutes on average per night (I’ll list the other 2+ minutes when we do the bottom 6F). Also, this is at ‘even strength’ as opposed to 5-on-5, I had to change things because Connor McDavid does so much at 4-on-4. Finally, all numbers are from last season save for the 18-19 projection (that’s my projection) and the numbers are from NaturalStatTrick. 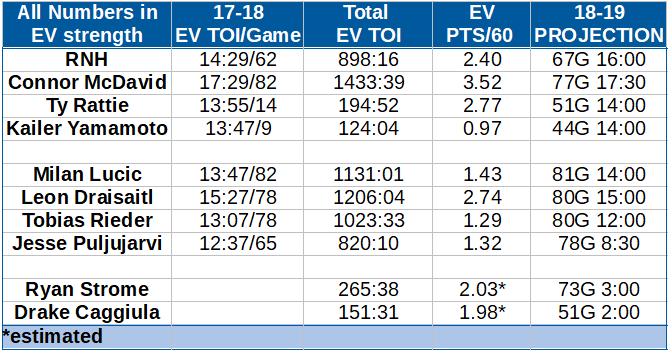 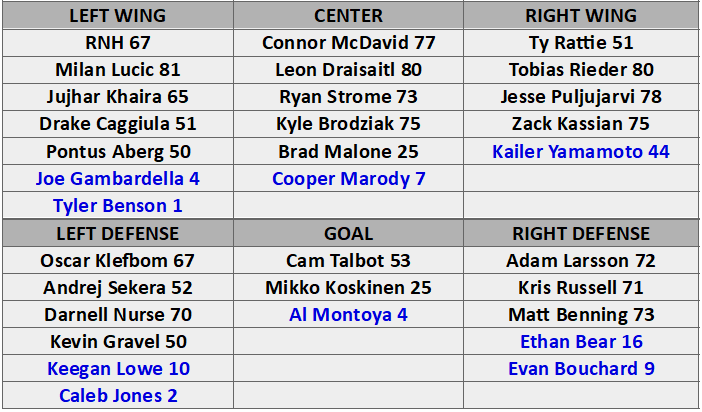 I didn’t watch the entire game last night but it was a poor showing overall by Evan Bouchard. The things we know he’ll need to improve (coverage) were off, but the things he does very well (passing) were also off. This happens, don’t panic. When a defenseman gets beaten outside, we can say he’s having an off night or needs to work on things. When he gets beaten inside, as happened to Bouchard (requiring a slash from his partner), the player either isn’t good enough (I don’t buy that) or may not be 100 percent. It’s August. He didn’t show well at all. Canada plays again today, I wouldn’t be surprised to see the coaching staff give him another start. Noah Dobson looks miles better in this tournament. Don’t panic, and please remember that I said don’t panic while also advising that you do not panic during this time of what I assume will be extreme panic. Thanks.

129 Responses to "A Trip to Reasonable"