As training camp edges nearer, we are getting the fun stories (“McDavid wants to score more goals!”) and the not fun stories (“Andrej Sekera is out indefinitely”) and now, as we reach September, fresh stories with new angles. In the words of the great songwriter Paul McCartney, we’re getting closer, my salamander.

"I want to be there with the guys when camp starts, those guys are like brothers to me … but what I want & what will happen are two different things. I'm not sure at this point."https://t.co/vGllKzScZr

People keep wondering about the holdup but I think this contract writes itself. Edmonton is going to sign Nurse to a bridge deal (two years times $3-3.25 million) and that’s going make money to tight to mention. The Oilers could get to $4 million with Nurse and that would help them get right to the cap outer marker—I believe this to be the case if they’re attempting to LTIR Sekera and acquire Justin Faulk. It might look like this. 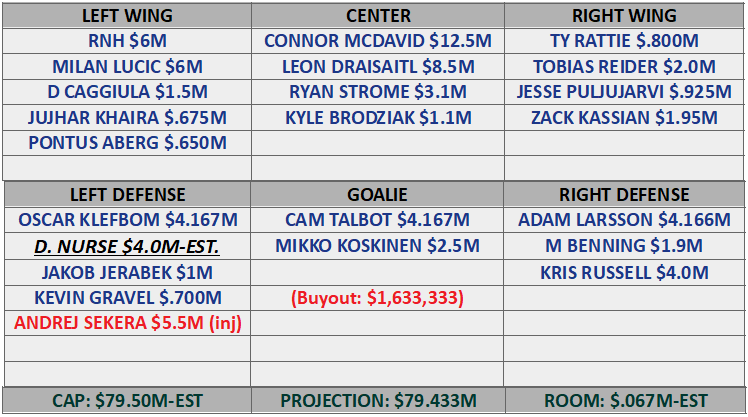 It certainly could be the plan, we’ll have to wait and see. Peter Chiarelli can go to camp, hope someone (Evan Bouchard, Ethan Bear) grabs the No. 6 slot with fine play, and then the defense becomes less of an issue. A guess? Justin Faulk is an Oiler shortly after the team lands back in North America after the opener in Europe. We discussed this over a week ago.

I had someone tell me yesterday that my RE’s are accurate and the answer is “not really” based on last season. I got close on Connor McDavid, but the overall thrust (I had 257-208, Oilers were 229-262) missed by many. The previous season, 2016-17, I predicted 226-226 and the team delivered 243-207. As much fun as projecting team scoring can be, definitely nothing you should bet money on. I haven’t published this year’s RE but have the final projection. It is shy of last year’s projection.

A busy morning on the show, we have some fluidity in the guest list. It starts at 10, TSN1260, scheduled to appear:

Once in a Lifetime (same as it ever was)

Back to the future

130 Responses to "Money Changes Everything"