The Edmonton Oilers added a third NHL player on a PTO Monday, this time rugged winger Alex Chiasson. He isn’t a perfect fit but there’s a story to tell and a job to be won. While we wait for the official training camp roster, Chiasson’s signing gives us some interesting things to ponder.

The Athletic made some big additions last week, including Daniel Nugent-Bowman joining the Edmonton staff. Daniel, Jonathan Willis, Minnia Feng, Pat McLean and me will deliver prose all winter long and there will be tons via the national desk from Tyler Dellow, Corey Pronman and Dom Luszczysyn. Special offer is here, less than $4 a month! Also, don’t forget to join us later this month (September 24, The Rec Room south side) for a get together and general merriment. I’m thrilled to be part of this group, hope you join us. 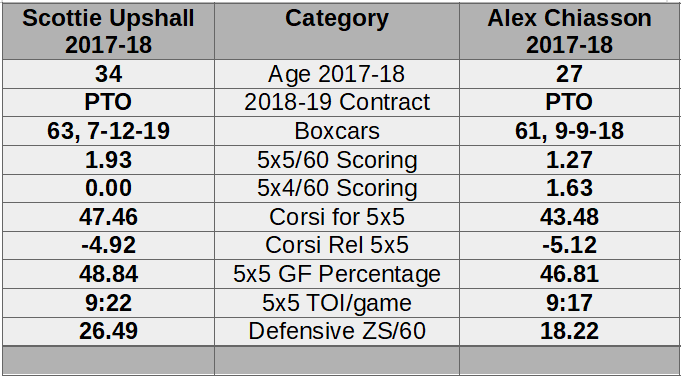 I like the relative youth of Chiasson, he might fit as a No. 4 right winger or depth player. He is rugged and can penalty kill, but both men would have to be considered less than ideal as options (Upshall’s SA/60 4-on-5 was 53.57, Chiasson’s was 66.81. As a comparable, Kassian was 49.58 one year ago). I think either man could make this team, unlikely both. Kassian might be a little vulnerable if Chiasson performs well, cap number is going to be an issue.

The Oilers are locked on to Evan Bouchard and you’re going to hear a lot about him this fall. Jay Woodcroft said nice things about him after the game yesterday and reiterated the verbal today.

What does that mean? We’ll see him early and often in main camp and there’s a gigantic chance Bouchard makes the trip to Cologne in a few weeks. He’s such an impressive passer you can see why they like him, but those coverage gaps are going to eat him up some nights. We’ll see.

McKenzie: "I mean, McDavid's game is on its own level, and it would be absolutely criminal if the Edmonton #Oilers cannot find a way to surround him w/ enough talent to get this team back into the playoffs."

I think that’s fair and management has earned the pressure cooker. I will say that the decisions this summer are encouraging. Drafting Evan Bouchard, Ryan McLeod and Olivier Rodrigue, holding on to Oscar Klefbom, Jesse Puljujarvi and others, these are astute decisions. Short-term deals for big money talents (with the cost of the future) are for teams who are poised to add one or two final pieces. Edmonton is still working on a building.

As angry as fans are, and again I get it, we have to look at the situation as it stands. Edmonton doesn’t have a lot of cap room in order to wheel (I like most of their summer signings, specifically Tobias Rieder) and the only trade pieces that could fetch a handsome return are too vital to the team’s future success.

Stay the course. That’s the play here. The answers are going to come from the system, not from gigantic trades that send away young assets. We’re almost through the offseason and the biggest alarm bell so far was signing a KHL goalie to about $1.5 million more than ideal. No assets given up, the draft returned real quality and Jesse Puljujarvi is still on the roster.

I understand the importance of making the playoffs. More important? Making sure the team has enough depth and balance to push for the Stanley Cup starting 2020. The die is cast, the 2018-19 season isn’t going to result in a Stanley Cup, perhaps there will be no postseason. That’s the reality.

I think this team will be life and death for the playoffs, but I know at least some of Puljujarvi, Yamamoto, Bouchard, Benson, Bear, Jones, Skinner and others will be closer to ready. Sucks to waste another McDavid season but we are here.

Is that what is going to happen? The addition of Chiasson lends credence to the idea that Kassian and a pick (or Khaira and a pick, in the case of Upshall) might be the price for Justin Faulk. LTIR Sekera (and pushing right to the cap edge before doing it) is an option the organization may pursue. We wait.

Probably should have added — and this is true of all RFAs, especially those who end up getting bridge deals after realizing vast gulf on long-term valuation, and that will be Nurse — they almost always get done. Just a matter of timing and how close to season opener. https://t.co/Q3ZyL6u593

Darnell Nurse isn’t Bobby Orr, but I’m confident in saying his attendance in training camp is vital for this organization’s success. The Oilers simply don’t have enough back there on the blue to suffer losses of both Nurse and Andrej Sekera in the days leading up to 2018 training camp.

At 10 this morning, TSN1260. We have a strong show and many things to discuss. Scheduled to appear: