Blame it on Larry Mavety. I believe he was in the hockey preview magazines every fall, as an NHL hopeful for one team or another. In modern times, you’d get quite a bit of information on a depth defenseman like Mavety (“prospect-stats.com has him No. 5 in the AHL in even-strength points and No. 2 in power-play points among blue”) but back then it was something like “Larry Mavety is also available” and that’s all she wrote.

I love watching prospects find their way to the NHL, especially the opening night roster. Evan Bouchard, Kailer Yamamoto and Ethan Bear will all sail far beyond Larry Mavety (who didn’t make the NHL but emerged as a solid player in the WHA) and their journey begins now. It’s hockey’s annual renewal, young men arriving and finding their place. It is a wonderful circle of life. 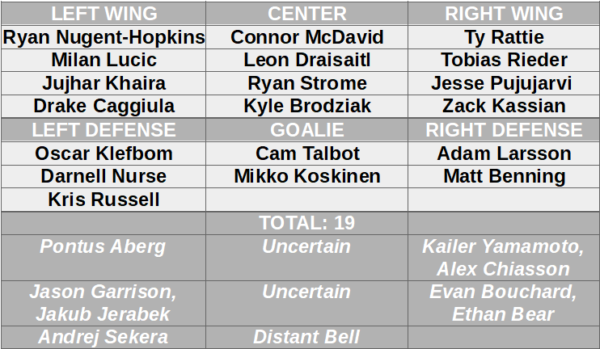 The roster is mostly set but there are some questions entering the final North American game of preseason (this afternoon’s contest). Jakub Jerabek was on the Certain list, partly because of his contract, but he hasn’t been good enough and that may mean Jason Garrison gets a contract. It’s also possible the team carries eight blue, and that Kailer Yamamoto heads to Bakersfield. Don’t forget about waivers. One thing I believe we can put into the 99.9% sure category:

"If we were to decide the team today, he would make the team for his 9-game test period." Chiarelli on Bouchard #Oilers

I think that gives Bouchard the edge over Bear, and that makes sense because the 9-game run for Bouchard would give Bear a chance to gain a little more experience in the AHL. I have been surprised by Bear’s solid defensive play (the offense is assumed) and there’s a sliver of a chance they keep both, but in this moment it’s important to remember seasons past when we weren’t having this conversation due to lack of depth. These are better days.

Leivo had 3 assists AND was credited with 3 takeaways + 0 giveaways in tonight's game.

This is a player I would love to see Edmonton acquire in the coming days. Inexpensive contract, solid offensive ability, plug and play. I imagine Toronto will find a way to keep him, they always do, but Leivo is a good hockey player who needs 500 at-bats. Edmonton has the opportunity.

Jason Gregor broke news on his show yesterday, Peter Chiarelli telling him Mikko Koskinen has a no movement along with $2.5 million on his one-year deal. I don’t really care about a NMC on a one-year deal, and the money is dear but the general manager was in search of a potential replacement for Cam Talbot beginning 2019-20 (Talbot may price himself out of Edmonton’s market, much like Curtis Joseph 20 years ago).

As an idea, I have no quarrel, but do wonder about the ability of this team to assess talent at the pro level. Is Mikko Koskinen (.937 save percentage last season) a better NHL goalie than Anders Nilsson (.936 in the same league the year before he played for Edmonton)?

I think offering a $2.5 million, one-year, no movement contract to a future No. 1 goalie is a fine idea, but the Oilers own past makes me wonder if they made the right choice. They got it right 2006 deadline with Dwayne Roloson, Mathieu Garon had a solid year, Nikolai Khabibulin couldn’t stay healthy. Ben Scrivens had his moments, Anders Nilsson okay, Jonas Gistavsson a misstep, Al Montoya not good enough.

The problem is you develop a past. We owe Mikko Koskinen his 500 at-bats and we are about to see about him.