This is an important day in the NHL calendar. All teams must submit to mandatory cap compliance on opening day rosters which are due at 3pm Edmonton time. As things stand this morning, the Oilers are at 25, with Andrej Sekera headed for the LTIR. There’s a possibility the two PTO’s get signed in the hours after compliance, with Sekera safely landed on the injured reserve. It’s also possible we see a trade today in an effort to achieve greater roster balance. 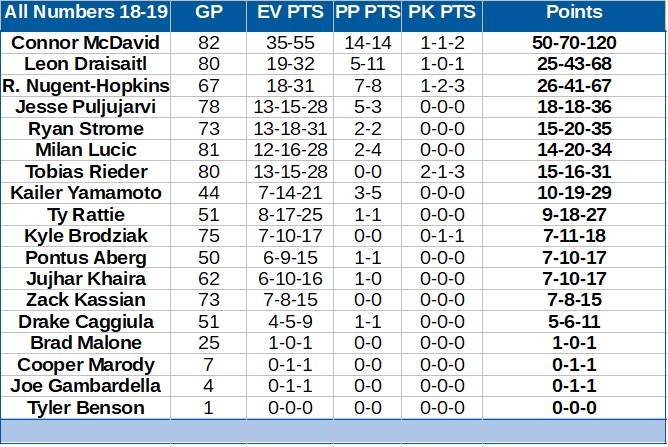 As promised, here is my work, will pass along defense and goaltending tomorrow. I have time on ice by discipline as well, although can’t imagine anyone would want to see that wall of numbers. I am projecting Connor McDavid to break on through to the other side, Nuge and Leon to pop 25+ and project five men to score between 10 and 18 goals. Last season, the top nine forwards delivered 163 goals, I’m projecting 182 for this group.

As an aside, my projections are already dead in the water. Pontus Aberg, who I was hoping to see on this team in 2018-19, is gone to Anaheim. So, it’s an exercise in futility but I enjoy doing it enormously. Hope you enjoy poring over these numbers. 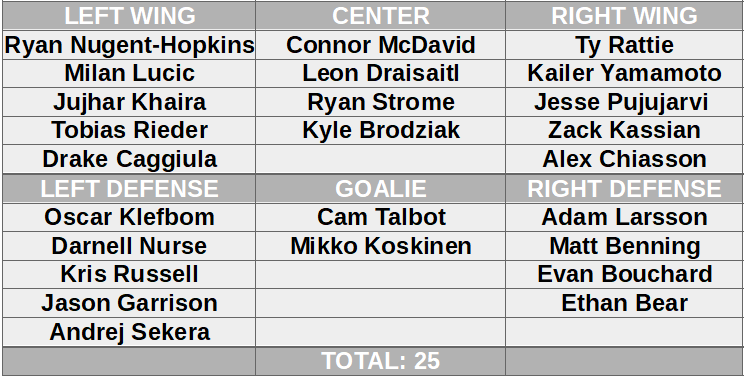 Edmonton doesn’t have to move a muscle to get compliant today, the roster sits at 23 (PTO’s haven’t signed yet and Peter Chiarelli has $589,668 (via CapFriendly). After they are confirmed compliant, the Oilers:

The question I have, and we should know soon, involves another transaction. Should the general manager make a deal for Alex Petrovic? He’s $1.95 million this season and then hits free agency. If Garrison and Chiasson come in at $1.6 combined, that’s over $3.5 million spent, three million dollars covered by Sekera’s LTIR. Is it worth it? Perhaps Garrison isn’t signed if Petrovic (or similar) are acquired. We’re going to find out right away. I still worry about a trade that mortgages the future, a ‘the call is coming from inside the house’ moment just before the season begins. Probably nothing. Probably.

The AHL site has Bakersfield’s roster, Stuart Skinner isn’t on it and Luke Esposito was signed to an AHL deal. Here’s the group:

Stuart Skinner and Colin Larkin do not appear on the roster, along with Shane Starrett and Ethan Bear who are in Germany with the NHL team.

Oilers dealt Jakub Jerabek yesterday, people went crazy for all kinds of reasons. If you want the truth, it goes like this: Peter Chiarelli, having learned about the Andrej Sekera injury, made an astute bet on the strongest (or near) option available. Jerabek didn’t have a good training camp, the organization felt a need to move on, and PC grabbed a late draft pick in 2020. It was a reasonable set of business decisions by the general manager, worthy of no monuments but we can acknowledge it as being solid work. The one area I might be critical? Jerabek may well have been a good option, exhibition games are exactly that, and Edmonton may regret making a decision on such a small sample. However, that’s nitpicking in my opinion.

The Oilers also lost Pontus Aberg on waivers to the Anaheim Ducks. I mentioned in my piece for The Athletic late Sunday it was curious the young winger didn’t get any time with Leon Draisaitl during preseason. He had played well there. I believe that’s a bigger item today than Jerabek but the general manager’s job is to provide the coach with players he can use. Todd McLellan didn’t see a way to use Aberg, we’ll see how he shines in California.

At 10 this morning, we hit the airwaves like a full force gale. TSN1260, waiver i nformation and possibly a trade today, likely one or two signings and certainly a transaction. Scheduled to appear:

279 Responses to "Bless You, Uncle Son (they won’t forget you when the revolution comes)"