Cologne is the fourth largest city in Germany, with a metro population of 3.5 million Schweinsteigers. Although Berlin, Hamburg and Munich are larger (and more famous) there is much to admire about Cologne. The city’s history is stunning, you could get lost in it and never find your way back to the 20th century, let alone this one. The Rhine floods routinely, soccer rules the day and beer runs freely from dawn to dusk and beyond. City council boasts two members from “The Good Ones” which sounds adorable and I’m not going to pursue knowledge because it’ll just ruin it when they aren’t an old married couple who ride bikes and sing 99 Luftballons. Cologne is lovely, and the home of Leon Draisaitl, Edmonton’s brilliant young schwenken. The Oilers play the town team today, Leon plays his Dad’s club in the town he’s known since a boy. It’s a nice story, one we’ll remember fondly if the Oilers can escape without a defenseman getting hurt. 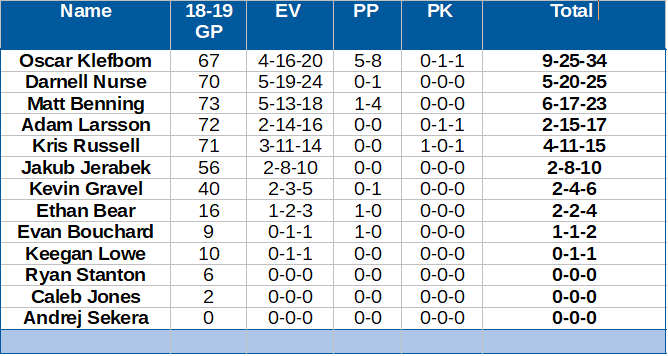 I published the forwards yesterday, here are the defensemen. I didn’t project anyone to play 82 games, looks like that was a wise plan based on early results. The power-play points go to Klefbom and a few for Benning. Combined with the forwards, I’m projecting 249 goals for Edmonton. That’s an increase of 20 goals year over year.

I have Talbot correcting and Koskinen doing an Anders Nilsson impersonation. The Oilers, based on my projections, are about to improve in goals against by 33. I’m projecting a goal differential of +20 for the year to come. Godspeed. 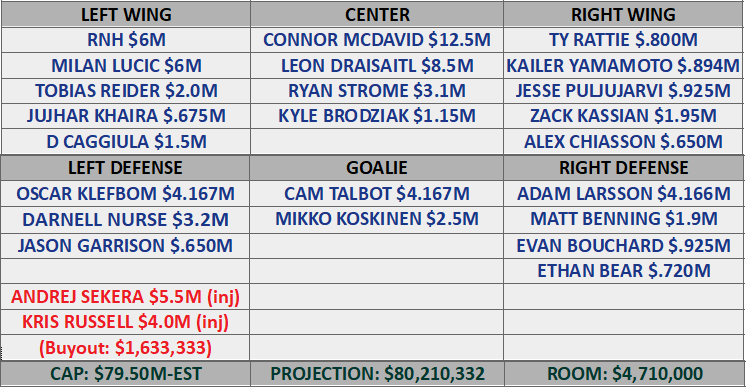 That defense being down two veterans must be a sphincter tightener for all involved, I’ll bet a 2-4 Peter Chiarelli is shopping down every aisle as we speak. He did get a nice piece of the LTIR to spend, poor Original Pouzar is going to be up nights worrying about it all winter. I don’t love the team but I love the fact they kept their powder dry. Almost the entire current active defense could be around for some time and right wing might be transformed a year from now (although going three for three is unlikely). I’m projecting this team to finish between 90 and 94 points, don’t know if it’ll be a playoff team but it should be a far more enjoyable ride in 2018-19.

Good information via Mark Ciampa is here, Ryan Jones and Corey Power Potterplay are Sharks and will play this morning. My first thought when looking at the defense? Oh, those Oilers.

We’ll be live at 10 this morning, TSN1260 with a strong group of guests. Scheduled to appear:

Something to Talk About