I mentioned yesterday there were no expectations heading into last night’s game, and maybe that’s why I came away with good vibrations from the loss in Boston. Edmonton won the 5-on-5 high danger scoring chances 7-4 (Natural Stat Trick), Cam Talbot stopped 26 of 27 at 5-on-5, McDavid hammered the sliver of a chance given for a goal, plus the Oilers had some great looks. That last item is the problem, ladies and men. Edmonton needs goals like Mars needs women. We’re on to Manhattan. 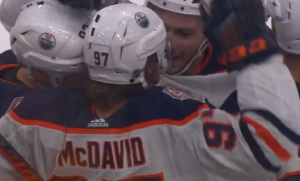 This is the worst start of the McLellan/Chiarelli era, but it’s two games and we knew the start of the season was going to be difficult. Edmonton is finding out about its roster and what might be needed, and that has value. Talbot’s 5-on-5 performance, McDavid in flight, and I did think young Evan Bouchard showed another night of improving before our eyes.

Edmonton lost twice to superior teams, the game last night on the road. I do these looks at the monthly schedule because it gives us a road map for expectations. You should expect the first win of the season on Saturday. If Edmonton can’t win there, I expect the whispers about Todd McLellan become audible murmurs. This schedule is basically the path chosen by the Donner party. Gordon Lightfoot’s a wreck. Holy hell boys I might have to use Van Morrison lyrics before Halloween.

A fun Friday on the show, of course we’ll talk Oilers and Eskimos. At 10 this morning, scheduled to appear:

For What It’s Worth