They’re just kids when they arrive, some of them can’t grow a beard for love nor money for several years. Fans give them names you would associate with kids (Baby Nuge) and trudge through the land of ice and snow to cheer for them. These young men matter in this city, grown men and women fret over each of the entry seasons. By the final year of the first contract, you should get an idea about what kind of player the team drafted, where he fits on the depth chart. For Jesse, we are here.

The Edmonton Oilers need a win in Manhattan today, and have a good chance to do it if the team can stay out of the penalty box. The 2016-17 formula (McDavid outscores 5-on-5, Talbot stops pucks) went 2-4 against NJD and Boston, the downbeat in competition today should be enough for the road team to win while skating on the most expensive real estate on planet earth. All is cost was 60 guilders.

General managers treat their own draft picks like the Hope Diamond. When a new general manager comes in, he normally takes very little time in dispatching the previous regime’s stuff and replacing them with a pile of his own pure stock. Sound crazy? Peter Chiarelli’s initial first-round pick was Zach Hamill, No. 8 overall in 2007. He was an overager, his production dipped in junior draft +1, he never got to 15 goals or 45 points in the AHL, but it took Chiarelli four pro seasons before he gave up on him. His second-round pick that year, Tommy Cross, outlasted Chiarelli in the organization while never actually threatening to become an everyday defenseman. PC did trade his first rounders, but not until he thought the Stanley was clearly in view (and then after). On the other hand, Taylor Hall and Nail Yakupov are long gone.

Todd McLellan wants to win, no, check that, he has to win. So, when the general manager sends him a roster with one position that features 75 percent unproven players (right wing), two of whom are first-round picks by the GM, that’s going to cause some sleepless nights. Todd McLellan is here.

Jesse Puljujarvi has enormous potential but three years after his draft he remains in purgatory. The team didn’t handle him in the textbook (Rantanen) way. Now, with the final year of entry just starting, JP is running on empty after brimming with confidence not so very long ago. What do they do with these kids?

I still believe in this player, believe the organization does as well. I think we’re reaching a pressure point, with the breaking news beginning with the classic line “it’s nobody’s fault, but….” and to be honest there’s no way to know how this goes down. Seems like we’re at the part of the book where the author writes “little did he know” except, in this Oilers’ edition, we don’t know who “he” is. Yet. 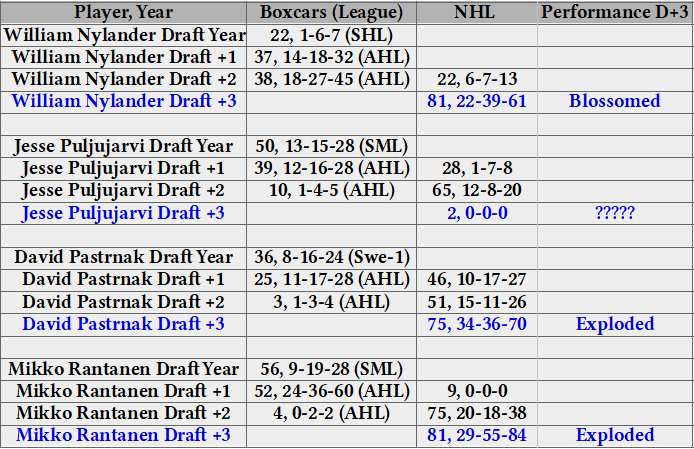 Early days, but if he’s losing confidence (and he’s not getting time with 97 or 29) then we’re about to see a 2018-19 season that does not resemble the other names on this list. What would happen if McLellan stapled Puljujarvi to the Draisaitl line? Perhaps we’ll never know.

A win today, especially a clean win, would put the Oilers on track with 2015 and 2017 October, with only the playoff season standing out. We don’t know how this game will go today, but the Oilers were good early in the first period and then settled down for the final 40 minutes of the game.

Get the first goal, stay the hell out of the penalty box, aggressively forecheck and make those defensemen on the Rangers make decisions quickly. I’m not one for hyperbole (that’s a lie) but this is a massive game for the coach. I expect the Oilers to come out flying.

This season should be about winning 45 games, pushing for the top of the division, and hammering old people in Anaheim and Los Angeles. Even with the department of youth, Edmonton has the best player in the game, a couple of 20-goal scorers and three defensemen who can do things to help them win. Cam Talbot can stop pucks and is doing so at even strength this season (.923 save percentage, No. 9 among goalies with 50+ saves so far this season). The heat is on. A win today eases the pressure, if only ’til Tuesday.

(You and me) Sittin’ in the back of my memory