Wilton Felder’s I Want You Back

The first time I saw Michael Jackson, he was on the Ed Sullivan Show with his brothers, singing “I Want You Back.” We don’t think of Michael Jackson in the same way now, but back in 1969 we only knew that he could sing like Diana Ross, and was not yet a teenager. The song became something of a staple for me as I grew older (I loved the Jackson 5) but didn’t find out about Wilton Felder’s work on the recorded track until I was in my 50’s. Oh my, what a bass track, three minutes of brilliance.

In yesterday’s game, Connor McDavid had a moment I’ll remember a long time, and it wasn’t the brilliant front-man stuff he does that everyone notices. Oilers fans are a bright bunch, so you probably already know what I’m talking about here. The game in doubt, McDavid went screaming through the neutral zone crowd and drove like a torpedo to his own net. He arrived just in time to intercept a Mika Zibanejad goalmouth pass meant for the streaking Jesper Fast. Crisis averted! Beautiful music!

In a long season it becomes cliche to pick out specific moments as being important in real time. We don’t know what tomorrow brings. That said, the Oilers badly needed to win, and if 97 doesn’t go runaway train on the play, we might be having a different conversation today. Yesterday in Manhattan, the captain went full Wilton Felder to give the Oilers deliverance. I’ll remember that play for a long time. 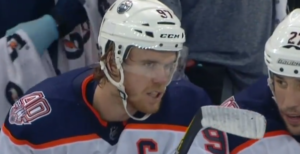 The Oilers are in league with the 2015 and 2017 teams, goal differential has 2 EN goals and three on the PP so there’s a story to tell. I don’t think this year’s team is a more (or less) promising playoff contender but the 5-on-5 goaltending is better in the early days.

Huge win for the team, they haven’t won a lot in Manhattan in recent seasons. The Winnipeg game will be interesting, we’ll discuss their chances of getting a point tomorrow. This Oilers team, as currently constructed, is more about building for the future than winning a playoff spot now.

I’m parsing words here, but it seems to me that quote, compared to previous ones on the same subject, expresses frustration in a more pronounced way. Perhaps I’m missing this completely, but the coach said ‘talked and talked and talked’ and there’s an edge in the way he said it. Where I come from (same place as McLellan), the end of the sentence is usually “and dammit I’m done talking” but the coach measured his words carefully. There does seem to be a little more freedom in his words there, not exactly MacT discussing Dustin Penner but it caught me when listening.

By the way: There are only two reasons for a coach to be more open than previous avails about a specific player.

The win helps, the pressure remains. I am convinced keeping the young talent is the right thing to do, but there are a lot of “Catch-22” bullet points on this roster currently.

Jesse Puljujarvi is a central figure in an internal organizational battle right now. He has talent, they believe in him, but JP is banished to the bottom-six forwards. Is that a coaching decision? Do the centers on the skill lines have trouble playing with the young Finn?

I’d stay the course, damn the torpedoes, keep those coaches teaching and keep pushing for wins even if things get more difficult. Daryl Katz may have a different approach. This feels like something has to give, perhaps it will.

NURSE TO BAKERSFIELD, HOME BY CHRISTMAS

A BIG RED BEACON, A FLAG AND A MAN ON A RAIL

262 Responses to "Wilton Felder’s I Want You Back"