I think this is an exercise in futility, but also feel a need to write it down. The Edmonton Oilers didn’t play well last night, and they didn’t get lucky either. The hockey team had several 10-bell chances that didn’t cash in the first period, and by the second period looked like the post-Christmas Oilers (lost in the supermarket).

The general manager and coach have to get this rig turned around and that probably means some kind of transaction(s). Peter Chiarelli should keep his powder dry. Stay the course. The sins of the past do not justify sending away any major portion of the future. Anything beyond one of those lefty blue and a depth draft pick for Mats Zuccarello is too much by plenty. Something’s gotta give, but the smart play is to hold back the water and give this time to burn.

Last night was disappointing but nothing close to terminal. Edmonton returns to a substantial set of opponents in the coming week and on a three-game losing streak. There’s no need to panic, beyond this team’s own history. The 2017 team is now creeping into the conversation with this year’s team.

The team is now on par with the 2015 group and slightly behind the two other seasons. No real panic yet but there’s a sense of opportunity missed.

WHAT TO EXPECT IN NOVEMBER

In order to reach my prediction, Edmonton would need to go 6-2-1 and that’s a big ask. I’m thinking my lowballing October may have impacted my highballing November, or something along those lines. Edmonton, after last night, is on pace to finish with 87 points, and that would see them outside the 2019 playoffs. 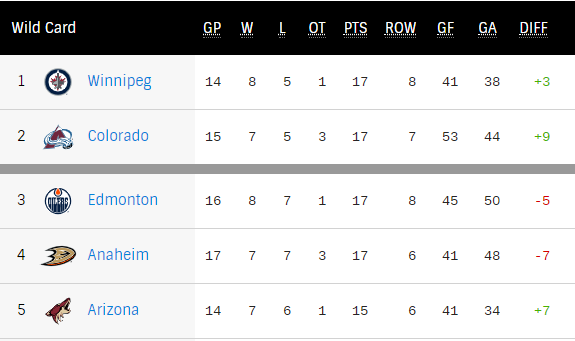 No need to panic, we agreed early Edmonton would finish between 90 and 94 points and that may or may not be enough to make the second season. Colorado, Winnipeg and Arizona have the best goal differential in this group, the Oilers need to be aiming for that kind of goal differential.

Per Darren Dreger, #Pens forward Daniel Sprong is out there among rumoured trade bait.

Per Bob McKenzie, #LAKings speculation is picking up on the team potentially dealing Tanner Pearson.

All kinds of rumors surrounding the Oilers now, The Fourth Period has Chiarelli casting about for a goaltender (don’t know about that one) while at least one rookie age 20 is apparently headed to Bakersfield.

I don’t think any of this makes sense. If management believes in Puljujarvi and Yamamoto, as they clearly do, then right wing needs only a rental fix and that player may not yet be available. The team badly needs a RHD but it’s a great bet that player isn’t available this time of year.

At 10 this morning, we kick off another Friday edition of the Lowdown. We’re going to have fun this morning, at 10:20 I’ll reveal my “most embarrassing moment in broadcasting” and it’s a wild one. No uber incident, but kind of nuts! TSN1260, scheduled to appear:

Going the Distance (Going for Speed)

Here Come the People in Grey

It Makes No Difference

232 Responses to "Hold Back The Water"