Who Will Take My Dreams Away

My Dad was an older man when he started working for places like Husky and CN in Maidstone, and the crews he joined in those jobs were populated by men 30 years younger. The first day he worked there (both jobs) had an impact on me. He came home and told my Mom it probably wasn’t going to work out, wildly out of character with his disposition.

The labour wasn’t an issue (my Dad passed at 80, he worked every day until 75 and even then would find odd jobs to occupy his time) but he had a helluva time relating to the young fellows on the Maidstone crew—and they with him.

For me, it was the beginning of understanding my Dad was aging, I became aware of his mortality. It was 1975. At both jobs he went through a pretty tough time, suspect he would have quit if he could have (I was still at home and my brother was just out on his own).

One day at the job (don’t remember which one) the crew added a new man, Andy Russett. I remember his name because for several weeks after he arrived, my Dad could talk about little else when it came to work. Andy Russett got along famously with my Dad, and he with him. A friendship formed from opposite ends of a working life, and it was good.  Within a few days, Andy Russett found a way to convince everyone my Dad was cool. Supper was better at our house through the winter, into spring and summer, and then another. No idea how he did it, but I’ve always remembered that act of kindness. My Dad needed a break and he got it. Sometimes, that’s all that it takes.

My favourite rock and roll song is called Thunder Road. It’s about leaving everything you know in search for a better place in life, without knowing where or when you will arrive at the place you belong. Jesse Puljujarvi made that bet before he grew to be a man. Jesse Puljujarvi will find his way in life. It might not be here. Sit tight. Take hold. Thunder Road.

I waited for 10 games to do NHL equivalencies, will do updates throughout the rest of the season. Here are the Condors top scoring prospects with their respective NHLE’s (using Vollman’s 48.6 and not adjusting for age):

Here are last year’s top players (including all leagues) with their NHLE adjustments and totals:

The Oilers have several fine prospects on the boil in Bakersfield. It doesn’t mean any of them will cash but there’s a better chance with (I count) four legit forwards and two bona fide defensemen on the 2018-19 club. I find myself drifting back to Claude Julien’s Bulldogs these days when looking for comparable teams. Here are his 2000-01 Bulldogs (prospects only) using the Gabriel Desjardins’ NHLE’s of the day:

The turn of the century team delivered three substantial careers, but several one-dimensional offensive types (Sarno, Riesen) fell away during their development seasons in the AHL. Horcoff was a college man, Chimera improved markedly as a junior and Pisani was more mature than pretty much everybody on the team despite being a relative newcomer to pro hockey.

What does that tell us about college players like Cooper Marody? He might not spend a lot of time in the AHL. Can we project Benson and Hebig based on the development of the CHL kids almost 20 years ago? No. What we can do is remind ourselves that the early offense out of the box is a good arrow, things are not necessarily as they appear, some of these players won’t make it, and we don’t know what we don’t know. 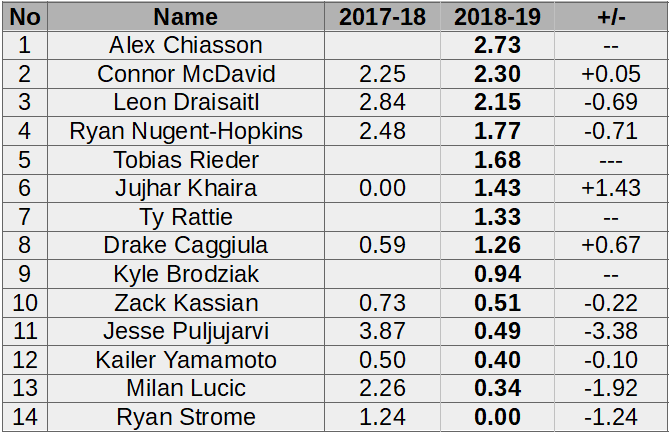 These are totals after 16 games in each season, and the differences individually. Jujhar Khaira had the biggest spike, going from rags to riches. Connor McDavid improved slightly, Drake Caggiula is up as well. Lots of underachievers in this group, that third line needs some spark. Nugent-Hopkins was performing at a higher level 5-on-5 a year ago, could have blown me over with a feather when I read it.

The Nuge-McDavid-Rattie line looks good to me, it will be interesting to see how long Todd McLellan runs the Rieder-Draisaitl-Chiasson line. Drake Caggiula appears to be stealing lunch from Jesse Puljujarvi and Kailer Yamamoto, meaning third line at worst for him. Jujhar Khaira has been in and out of the lineup, I remain onside with what he brings. Ryan Strome’s line has been a little more encouraging lately.

This is going to be an interesting week. Stay tuned.

OILERS AT NO. 4: JESSE PULJUJARVI

202 Responses to "Who Will Take My Dreams Away"